The capacity of respiratory viruses to undergo evolution within the respiratory tract raises the possibility of evolution under the selective pressure of the host environment or drug treatment. Long-term infections in immunocompromised hosts are potential drivers of viral evolution and development of infectious variants. We showed that intrahost evolution in chronic human parainfluenza virus 3 (HPIV3) infection in immunocompromised individuals elicited mutations that favored viral entry and persistence, suggesting that similar processes may operate across enveloped respiratory viruses. We profiled longitudinal HPIV3 infections from 2 immunocompromised individuals that persisted for 278 and 98 days. Mutations accrued in the HPIV3 attachment protein hemagglutinin-neuraminidase (HN), including the first in vivo mutation in HN’s receptor binding site responsible for activating the viral fusion process. Fixation of this mutation was associated with exposure to a drug that cleaves host-cell sialic acid moieties. Longitudinal adaptation of HN was associated with features that promote viral entry and persistence in cells, including greater avidity for sialic acid and more active fusion activity in vitro, but not with antibody escape. Long-term infection thus led to mutations promoting viral persistence, suggesting that host-directed therapeutics may support the evolution of viruses that alter their biophysical characteristics to persist in the face of these agents in vivo. 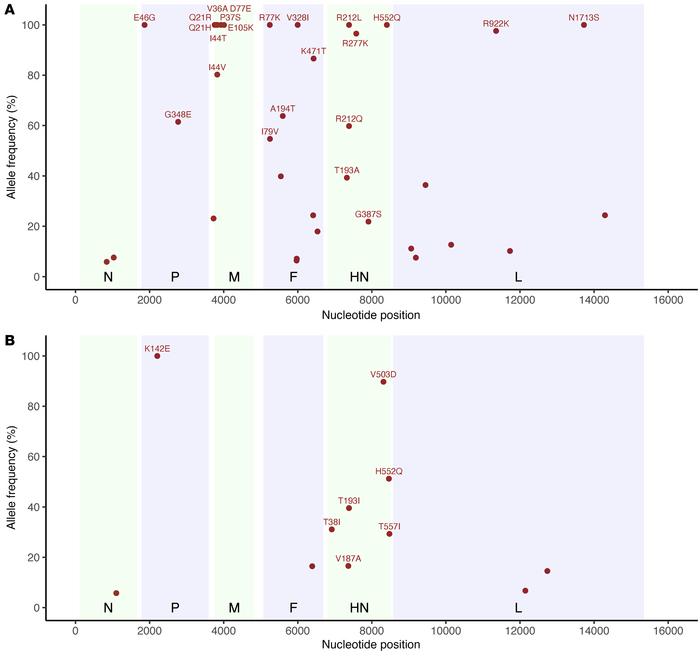