The switch from anchorage-dependent to anchorage-independent growth is essential for epithelial metastasis. The underlying mechanism, however, is not fully understood. In this study, we identified growth factor independent-1 (GFI1), a transcription factor that drives the transition from adherent endothelial cells to suspended hematopoietic cells during hematopoiesis, as a critical regulator of anchorage independence in lung cancer cells. GFI1 elevated the numbers of circulating and lung-infiltrating tumor cells in xenograft models and predicted poor prognosis of patients with lung cancer. Mechanistically, GFI1 inhibited the expression of multiple adhesion molecules and facilitated substrate detachment. Concomitantly, GFI1 reconfigured the chromatin structure of the RASGRP2 gene and increased its expression, causing Rap1 activation and subsequent sustained ERK activation upon detachment, and this led to ERK signaling dependency in tumor cells. Our studies unveiled a mechanism by which carcinoma cells hijacked a hematopoietic factor to gain anchorage independence and suggested that the intervention of ERK signaling may suppress metastasis and improve the therapeutic outcome of patients with GFI1-positive lung cancer. 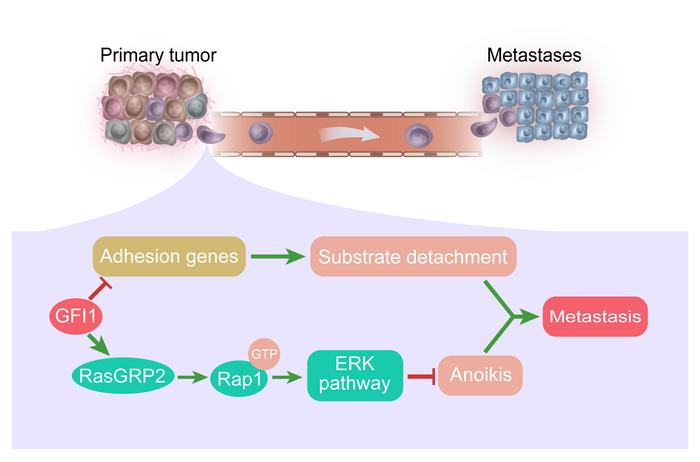