Seasonal influenza vaccination elicits a diminished adaptive immune response in the elderly, and the mechanisms of immunosenescence are not fully understood. Using Ig-Seq, we found a marked increase with age in the prevalence of cross-reactive (CR) serum antibodies that recognize both the H1N1 (vaccine-H1) and H3N2 (vaccine-H3) components of an egg-produced split influenza vaccine. CR antibodies accounted for 73% ± 18% of the serum vaccine responses in a cohort of elderly donors, 65% ± 15% in late middle-aged donors, and only 13% ± 5% in persons under 35 years of age. The antibody response to non-HA antigens was boosted by vaccination. Recombinant expression of 19 vaccine-H1+H3 CR serum monoclonal antibodies (s-mAbs) revealed that they predominantly bound to non-HA influenza proteins. A sizable fraction of vaccine-H1+H3 CR s-mAbs recognized with high affinity the sulfated glycans, in particular sulfated type 2 N-acetyllactosamine (Galβ1-4GalNAcβ), which is found on egg-produced proteins and thus unlikely to contribute to protection against influenza infection in humans. Antibodies against sulfated glycans in egg-produced vaccine had been identified in animals but were not previously characterized in humans. Collectively, our results provide a quantitative basis for how repeated exposure to split influenza vaccine correlates with unintended focusing of serum antibody responses to non-HA antigens that may result in suboptimal immunity against influenza. 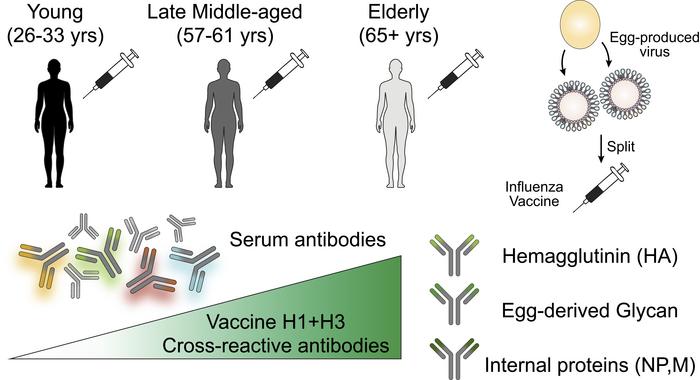