Hypoxia, a hallmark feature of the tumor microenvironment, causes resistance to conventional chemotherapy, but was recently reported to synergize with poly(ADP-ribose) polymerase inhibitors (PARPis) in homologous recombination–proficient (HR-proficient) cells through suppression of HR. While this synergistic killing occurs under severe hypoxia (<0.5% oxygen), our study shows that moderate hypoxia (2% oxygen) instead promotes PARPi resistance in both HR-proficient and -deficient cancer cells. Mechanistically, we identify reduced ROS-induced DNA damage as the cause for the observed resistance. To determine the contribution of hypoxia to PARPi resistance in tumors, we used the hypoxic cytotoxin tirapazamine to selectively kill hypoxic tumor cells. We found that the selective elimination of hypoxic tumor cells led to a substantial antitumor response when used with PARPi compared with that in tumors treated with PARPi alone, without enhancing normal tissue toxicity. Since human breast cancers with BRAC1/2 mutations have an increased hypoxia signature and hypoxia reduces the efficacy of PARPi, then eliminating hypoxic tumor cells should enhance the efficacy of PARPi therapy. 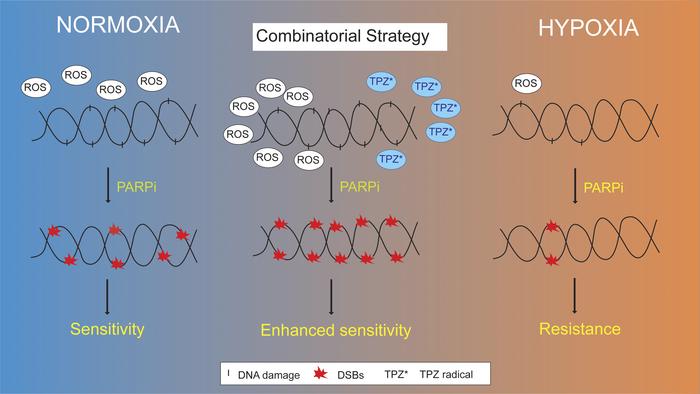