Restriction of HIV-1 replication in elite controllers (ECs) is frequently attributed to T cell–mediated immune responses, while the specific contribution of innate immune cells is less clear. Here, we demonstrate an upregulation of the host long noncoding RNA (lncRNA) MIR4435-2HG in primary myeloid dendritic cells (mDCs) from ECs. Elevated expression of this lncRNA in mDCs was associated with a distinct immunometabolic profile, characterized by increased oxidative phosphorylation and glycolysis activities in response to TLR3 stimulation. Using functional assays, we show that MIR4435-2HG directly influenced the metabolic state of mDCs, likely through epigenetic mechanisms involving H3K27ac enrichment at an intronic enhancer in the RPTOR gene locus, the main component of the mammalian target of rapamycin complex 1 (mTORC1). Together, these results suggest a role of MIR4435-2HG for enhancing immunometabolic activities of mDCs in ECs through targeted epigenetic modifications of a member of the mTOR signaling pathway.

Upregulation of in mDCs is associated with an enhanced metabolic profile. 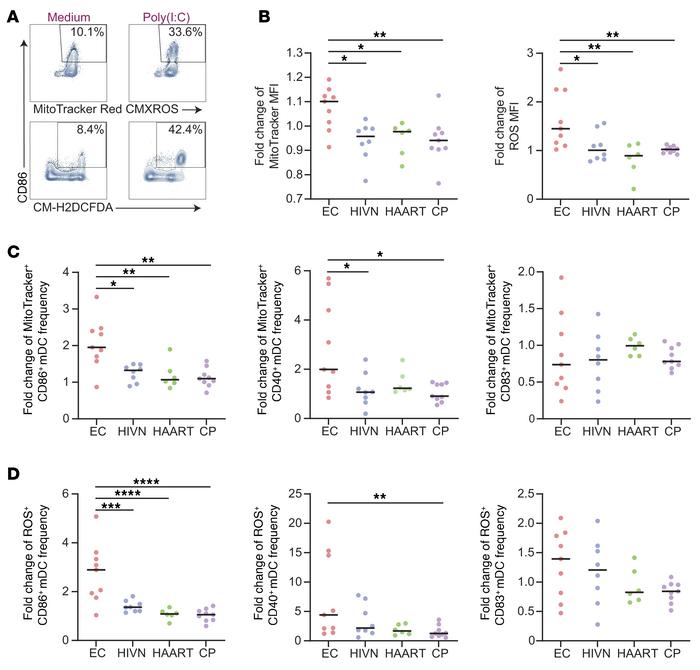 () Flow cytometry contour plots displaying the coexpression of MitoTracker or ROS and activation marker CD86 in mDCs from a representative EC with or without 2 μg/mL Poly(I:C) stimulation for 24 hours. () The MFIs of MitoTracker and ROS in total mDCs were compared among ECs ( = 9), HIVNs ( = 8), HAARTs ( = 6), and CPs ( = 9). The MFIs were shown as fold changes after Poly(I:C) stimulation, relative to unstimulated controls. Kruskal-Wallis test was used for statistical analysis. (, ) The frequencies of mDCs coexpressing MitoTracker or ROS and activation markers (CD86, CD40, and CD83) in ECs ( = 9), HIVNs ( = 8), HAARTs ( = 6), and CPs ( = 9) were compared. The frequencies were expressed as fold changes of respective cell populations after Poly(I:C) stimulation, relative to unstimulated conditions. Kruskal-Wallis test was used to compare the fold changes of cell frequencies among cohorts. * < 0.05, ** < 0.01, *** < 0.001, **** < 0.0001.