Disrupting transmission of Borrelia burgdorferi sensu lato complex (B. burgdorferi) from infected ticks to humans is one strategy to prevent the significant morbidity from Lyme disease. We have previously shown that an anti-OspA human mAb, 2217, prevents transmission of B. burgdorferi from infected ticks in animal models. Maintenance of a protective plasma concentration of a human mAb for tick season presents a significant challenge for a preexposure prophylaxis strategy. Here, we describe the optimization of mAb 2217 by amino acid substitutions (2217LS: M428L and N434S) in the Fc domain. The LS mutation led to a 2-fold increase in half-life in cynomolgus monkeys. In a rhesus macaque model, 2217LS protected animals from tick transmission of spirochetes at a dose of 3 mg/kg. Crystallographic analysis of Fab in complex with OspA revealed that 2217 bound an epitope that was highly conserved among the B. burgdorferi, B. garinii, and B. afzelii species. Unlike most vaccines that may require boosters to achieve protection, our work supports the development of 2217LS as an effective preexposure prophylaxis in Lyme-endemic regions, with a single dose at the beginning of tick season offering immediate protection that remains for the duration of exposure risk. 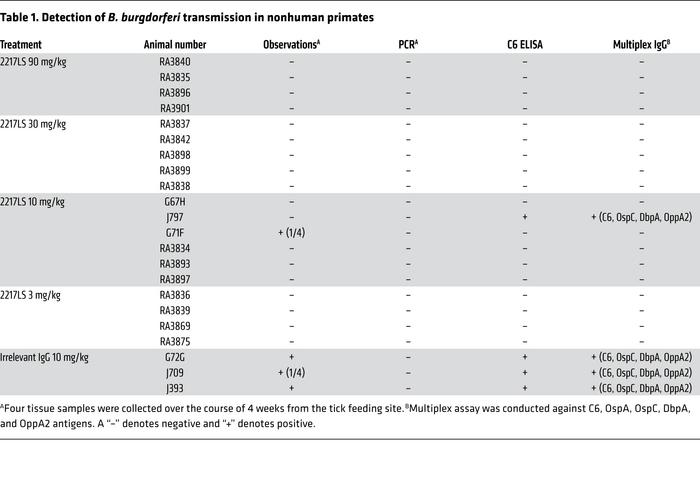 Detection of transmission in nonhuman primates