Although platelets are the cellular mediators of thrombosis, they are also immune cells. Platelets interact both directly and indirectly with immune cells, impacting their activation and differentiation, as well as all phases of the immune response. Megakaryocytes (Mks) are the cell source of circulating platelets, and until recently Mks were typically only considered bone marrow–resident (BM-resident) cells. However, platelet-producing Mks also reside in the lung, and lung Mks express greater levels of immune molecules compared with BM Mks. We therefore sought to define the immune functions of lung Mks. Using single-cell RNA sequencing of BM and lung myeloid-enriched cells, we found that lung Mks, which we term MkL, had gene expression patterns that are similar to antigen-presenting cells. This was confirmed using imaging and conventional flow cytometry. The immune phenotype of Mks was plastic and driven by the tissue immune environment, as evidenced by BM Mks having an MkL-like phenotype under the influence of pathogen receptor challenge and lung-associated immune molecules, such as IL-33. Our in vitro and in vivo assays demonstrated that MkL internalized and processed both antigenic proteins and bacterial pathogens. Furthermore, MkL induced CD4+ T cell activation in an MHC II–dependent manner both in vitro and in vivo. These data indicated that MkL had key immune regulatory roles dictated in part by the tissue environment. 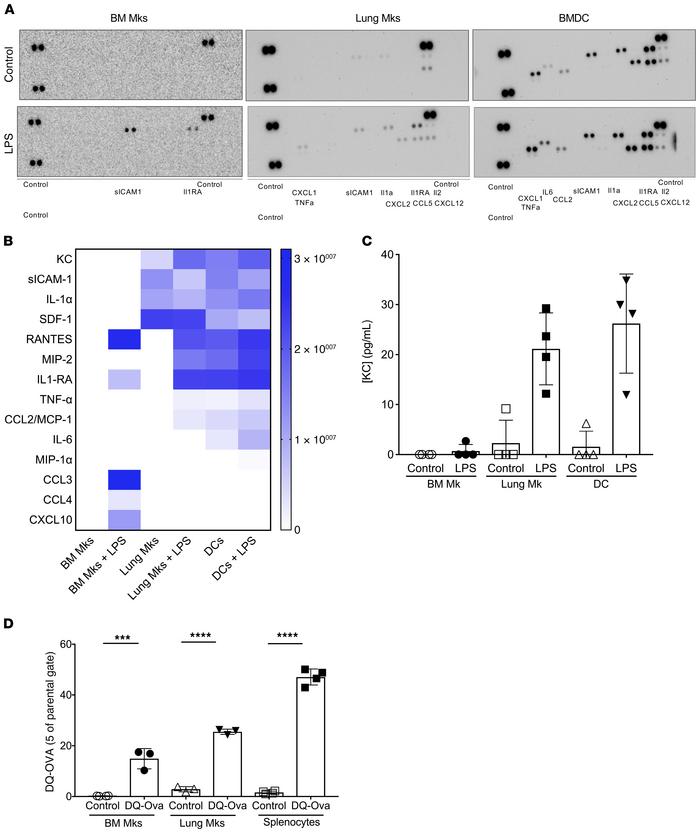 ( and ) Lung Mks had greater LPS-induced inflammatory molecule production compared with BM Mks. Mks were incubated for 24 hours with control buffer or LPS. Inflammatory molecules were identified by a () cytokine array and () relative intensities compared with control plotted as a heatmap. () KC in the supernatant measured by ELISA. () Antigen processing in vitro. Mks were incubated with DQ-Ova for 30 minutes and fluorescence was determined by flow cytometry (unpaired test). *** = 0.0001 to 0.001, **** < 0.0001.