Group B Streptococcus (GBS) is the major cause of human neonatal infections. A single clone, designated CC17-GBS, accounts for more than 80% of meningitis cases, the most severe form of the infection. However, the events allowing blood-borne GBS to penetrate the brain remain largely elusive. In this study, we identified the host transmembrane receptors α5β1 and αvβ3 integrins as the ligands of Srr2, a major CC17-GBS–specific adhesin. Two motifs located in the binding region of Srr2 were responsible for the interaction between CC17-GBS and these integrins. We demonstrated in a blood-brain-barrier cellular model that both integrins contributed to the adhesion and internalization of CC17-GBS. Strikingly, both integrins were overexpressed during the postnatal period in the brain vessels of the blood-brain barrier and blood-cerebrospinal fluid barrier and contributed to juvenile susceptibility to CC17 meningitis. Finally, blocking these integrins decreased the ability of CC17-GBS to cross into the CNS of juvenile mice in an in vivo model of meningitis. Our study demonstrated that CC17-GBS exploits integrins in order to cross the brain vessels, leading to meningitis. Importantly, it provides host molecular insights into neonate’s susceptibility to CC17-GBS meningitis, thereby opening new perspectives for therapeutic and prevention strategies of GBS-elicited meningitis. 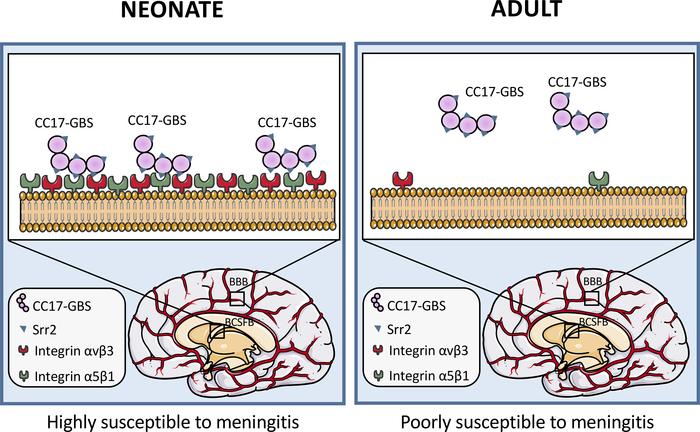