T cell–mediated responses are dependent on their secretion of key effector molecules. However, the critical molecular determinants of the secretion of these proteins are largely undefined. Here, we demonstrate that T cell activation increases trafficking via the ER-to-Golgi pathway. To study the functional role of this pathway, we generated mice with a T cell–specific deletion in SEC23B, a core subunit of coat protein complex II (COPII). We found that SEC23B critically regulated the T cell secretome following activation. SEC23B-deficient T cells exhibited a proliferative defect and reduced effector functions in vitro, as well as in experimental models of allogeneic and xenogeneic hematopoietic cell transplantation in vivo. However, T cells derived from 3 patients with congenital dyserythropoietic anemia II (CDAII), which results from Sec23b mutation, did not exhibit a similar phenotype. Mechanistic studies demonstrated that unlike murine KO T cells, T cells from patients with CDAII harbor increased levels of the closely related paralog, SEC23A. In vivo rescue of murine KO by expression of Sec23a from the Sec23b genomic locus restored T cell functions. Together, our data demonstrate a critical role for the COPII pathway, with evidence for functional overlap in vivo between SEC23 paralogs in the regulation of T cell immunity in both mice and humans. 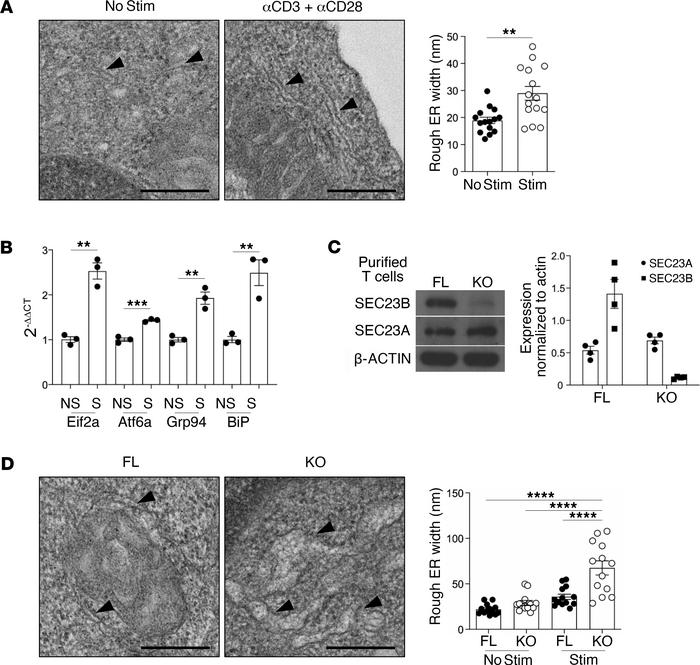