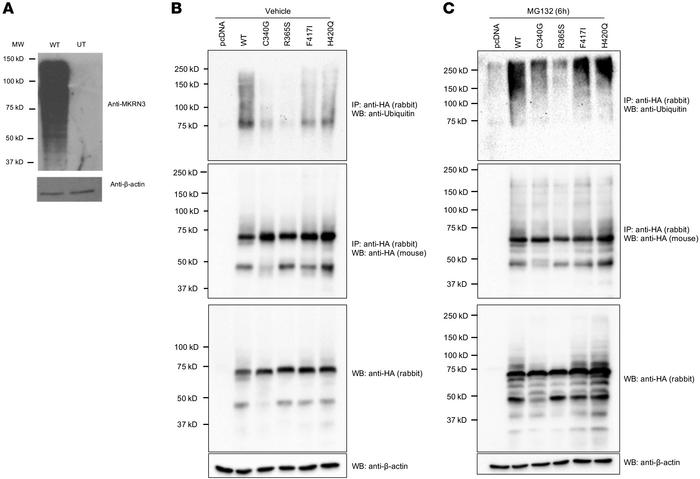 () HEK293T cells were transfected with a plasmid encoding WT MKRN3 (WT), or were untransfected (UT). The membrane was immunoblotted with anti-MKRN3, and with anti–β-actin as control. Whole-cell lysates revealed a smear, typical of the pattern shown by polyubiquitinated proteins. Coexpression of his-ubiquitin with MKRN3 resulted in a smear of larger complexes, corresponding to polyubiquitinated protein. ( and ) HEK293T cells were transfected with empty pcDNA, WT MKRN3, or mutant MKRN3. Immune complexes were precipitated using protein A anti-HA beads and probed with anti-ubiquitin (upper panel) or anti-HA (middle panel); lower panels correspond to whole-cell lysates probed with anti-HA. () Transfected cells treated with vehicle. Upper panel: An upper smear is present when immunoblotted with anti-ubiquitin; it is stronger in the lane loaded with protein from cells transfected with WT MKRN3 than with MKRN3 mutants. Middle panel: Immunoblotting with anti-HA shows a main band below 75 kDa in lanes with WT MKRN3 and MKRN3 mutants, likely corresponding to a mature form of MKRN3; a band at 50 kDa was also detected in lysates from both WT and mutant MRKN3, but was significantly weaker in intensity for C340G MKRN3 compared with WT MKRN3 and other mutants. () Transfected cells treated with MG132. Upper panel: Probing with anti-ubiquitin results in a smear suggestive of auto-ubiquitination that is stronger with WT MKRN3 compared with the MKRN3 mutants located in the zinc finger, F417I and H420G, and is weakest for the RING finger mutants, C340G and R365S. Middle panel: Probed with anti-HA, protein levels are similar for WT MKRN3 and all mutants. In all, anti–β-actin antibody (bottom panels) was a loading control. WT, WT MKRN3; UT, untransfected cells; MW, molecular weight.