BACKGROUND Understanding HIV dynamics across the human body is important for cure efforts. This goal has been hampered by technical difficulties and the challenge of obtaining fresh tissues.METHODS This observational study evaluated 6 individuals with HIV (n = 4 with viral suppression using antiretroviral [ART] therapy; n = 2 with rebound viremia after stopping ART), who provided serial blood samples before death and their bodies for rapid autopsy. HIV reservoirs were characterized by digital droplet PCR, single-genome amplification, and sequencing of full-length (FL) envelope HIV. Phylogeographic methods were used to reconstruct HIV spread, and generalized linear models were tested for viral factors associated with dispersal.RESULTS Across participants, HIV DNA levels varied from approximately 0 to 659 copies/106 cells (IQR: 22.9–126.5). A total of 605 intact FL env sequences were recovered in antemortem blood cells and across 28 tissues (IQR: 5–9). Sequence analysis showed (a) the emergence of large, identical, intact HIV RNA populations in blood after cessation of therapy, which repopulated tissues throughout the body; (b) that multiple sites acted as hubs for HIV dissemination but that blood and lymphoid tissues were the main source; (c) that viral exchanges occurred within brain areas and across the blood-brain barrier; and (d) that migration was associated with low HIV divergence between sites and greater diversity at the recipient site.CONCLUSION HIV reservoirs persisted in all deep tissues, and blood was the main source of dispersal. This may explain why eliminating HIV susceptibility in circulating T cells via bone marrow transplants allowed some individuals with HIV to experience therapy-free remission, even though deeper tissue reservoirs were not targeted.TRIAL REGISTRATION Not applicable.FUNDING NIH grants P01 AI31385, P30 AI036214, AI131971-01, AI120009AI036214, HD094646, AI027763, AI134295, and AI68636.

Proportion of supported transition events between compartments for 2 participants who either stopped ART or remained virally suppressed on ART. 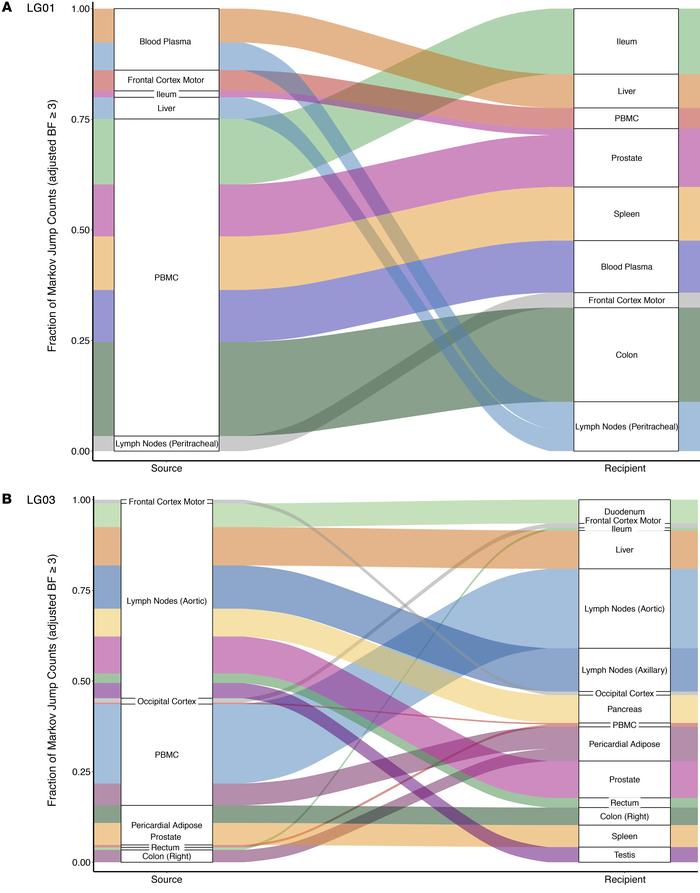 () Data for the participant who stopped ART. () Data for the participant who remained virally suppressed on ART. Sankey plot shows the proportion of transition events between locations for which the adjusted BF was 3 or higher (at least positive evidence). The adjusted BF support for each transition type is given next to the corresponding color. The source locations are depicted on the left side of the plots and the destination locations on the right side. See also .