Although autophagy is generally protective, uncontrolled or excessive activation of autophagy can be detrimental. However, it is often difficult to distinguish death by autophagy from death with autophagy, and whether autophagy contributes to death in cardiomyocytes (CMs) is still controversial. Excessive activation of autophagy induces a morphologically and biochemically defined form of cell death termed autosis. Whether autosis is involved in tissue injury induced under pathologically relevant conditions is poorly understood. In the present study, myocardial ischemia/reperfusion (I/R) induced autosis in CMs, as evidenced by cell death with numerous vacuoles and perinuclear spaces, and ﻿depleted intracellular membranes. Autosis was observed frequently after 6 hours of reperfusion, accompanied by upregulation of Rubicon, attenuation of autophagic flux, and marked accumulation of autophagosomes. Genetic downregulation of Rubicon inhibited autosis and reduced I/R injury, whereas stimulation of autosis during the late phase of I/R with Tat–Beclin 1 exacerbated injury. Suppression of autosis by ouabain, a cardiac glycoside, in humanized ﻿Na+,K+-ATPase–knockin mice reduced I/R injury. Taken together, these results demonstrate that autosis is significantly involved in I/R injury in the heart and triggered by dysregulated accumulation of autophagosomes due to upregulation of Rubicon.

Autophagic flux is increased during early reperfusion but is inhibited during late reperfusion in the mouse heart. 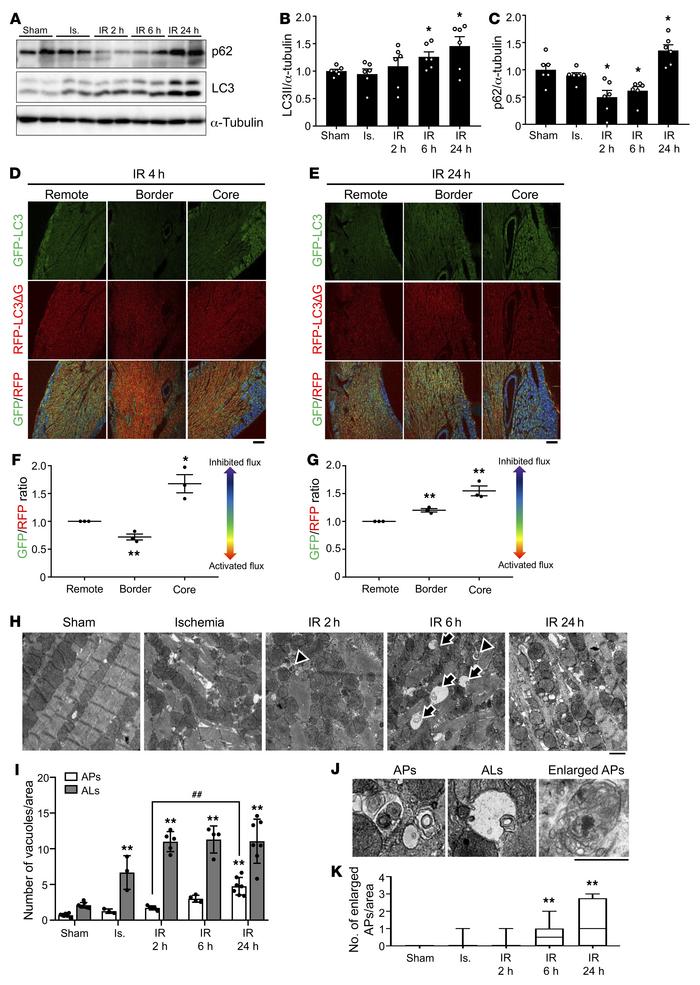