B cell–intrinsic TLR9 expression is protective in murine lupus

B cell–intrinsic TLR9 expression is protective in murine lupus

Toll-like receptor 9 (TLR9) is a regulator of disease pathogenesis in systemic lupus erythematosus (SLE). Why TLR9 represses disease while TLR7 and MyD88 have the opposite effect remains undefined. To begin to address this question, we created 2 alleles to manipulate TLR9 expression, allowing for either selective deletion or overexpression. We used these to test cell type–specific effects of Tlr9 expression on the regulation of SLE pathogenesis. Notably, Tlr9 deficiency in B cells was sufficient to exacerbate nephritis while extinguishing anti–nucleosome antibodies, whereas Tlr9 deficiency in dendritic cells (DCs), plasmacytoid DCs, and neutrophils had no discernable effect on disease. Thus, B cell–specific Tlr9 deficiency unlinked disease from autoantibody production. Critically, B cell–specific Tlr9 overexpression resulted in ameliorated nephritis, opposite of the effect of deleting Tlr9. Our findings highlight the nonredundant role of B cell–expressed TLR9 in regulating lupus and suggest therapeutic potential in modulating and perhaps even enhancing TLR9 signals in B cells. 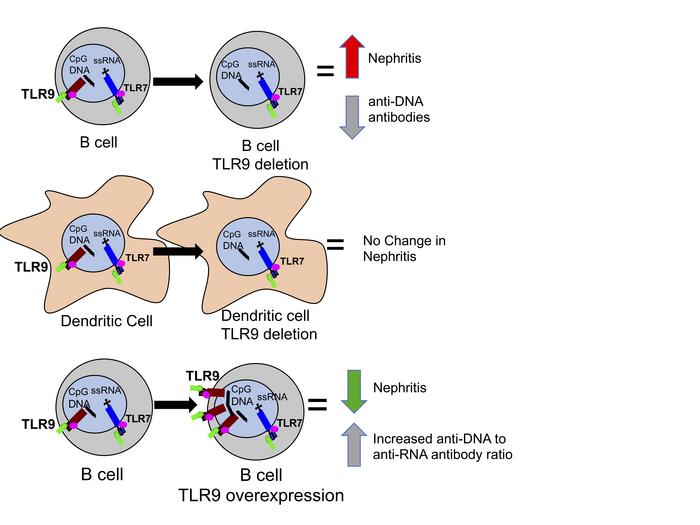