Diabetes is a common complication of cystic fibrosis (CF) that affects approximately 20% of adolescents and 40%–50% of adults with CF. The age at onset of CF-related diabetes (CFRD) (marked by clinical diagnosis and treatment initiation) is an important measure of the disease process. DNA variants associated with age at onset of CFRD reside in and near SLC26A9. Deep sequencing of the SLC26A9 gene in 762 individuals with CF revealed that 2 common DNA haplotypes formed by the risk variants account for the association with diabetes. Single-cell RNA sequencing (scRNA-Seq) indicated that SLC26A9 is predominantly expressed in pancreatic ductal cells and frequently coexpressed with CF transmembrane conductance regulator (CFTR) along with transcription factors that have binding sites 5′ of SLC26A9. These findings were replicated upon reanalysis of scRNA-Seq data from 4 independent studies. DNA fragments derived from the 5′ region of SLC26A9-bearing variants from the low-risk haplotype generated 12%–20% higher levels of expression in PANC-1 and CFPAC-1 cells compared with the high- risk haplotype. Taken together, our findings indicate that an increase in SLC26A9 expression in ductal cells of the pancreas delays the age at onset of diabetes, suggesting a CFTR-agnostic treatment for a major complication of CF.

Coexpression of and in pancreatic cells. 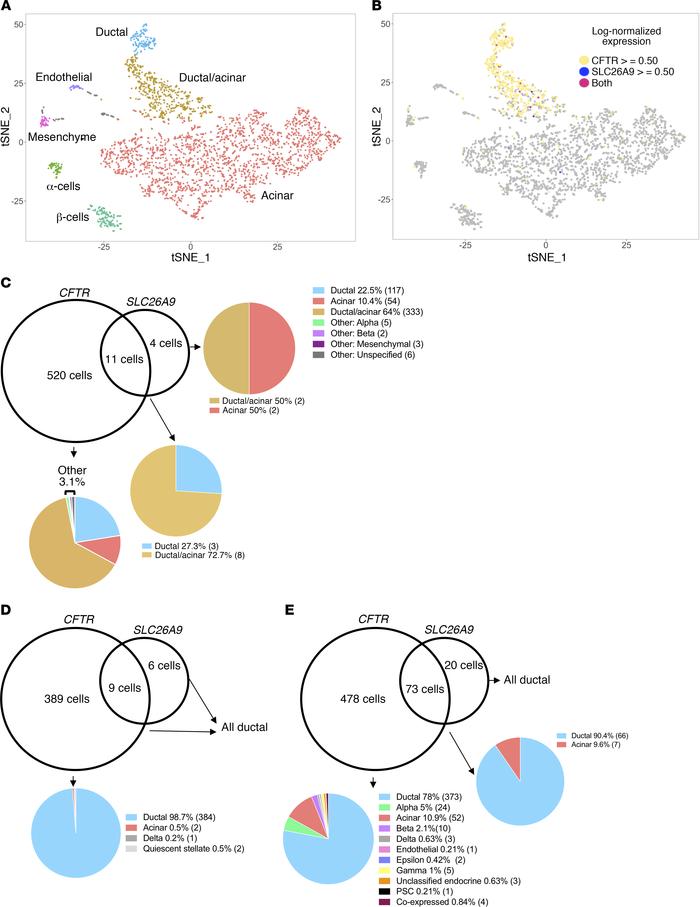