The Toll-like receptor 8 (TLR8) has an important role in innate immune responses to RNA viral infections, including respiratory syncytial virus (RSV). We previously reported that TLR8 expression was increased directly by the tumor suppressor and transcription factor p53 via a single nucleotide polymorphism (SNP) (rs3761624) in the TLR8 promoter, thereby placing TLR8 in the p53/immune axis. Because this SNP is in linkage disequilibrium with other SNPs associated with several infectious diseases, we addressed the combined influence of p53 and the SNP on downstream inflammatory signaling in response to a TLR8 cognate ssRNA ligand. Using human primary lymphocytes, p53 induction by chemotherapeutic agents such as ionizing radiation caused SNP-dependent synergistic increases in IL-6 following incubation with an ssRNA ligand, as well as TLR8 RNA and protein expression along with p53 binding at the TLR-p53 SNP site. Because TLR8 is X-linked, the increases were generally reduced in heterozygous females. We found a corresponding association of the p53-responsive allele with RSV disease severity in infants hospitalized with RSV infection. We conclude that p53 can strongly influence TLR8-mediated immune responses and that knowledge of the p53-responsive SNP can inform diagnosis and prognosis of RSV disease and other diseases that might have a TLR8 component, including cancer. 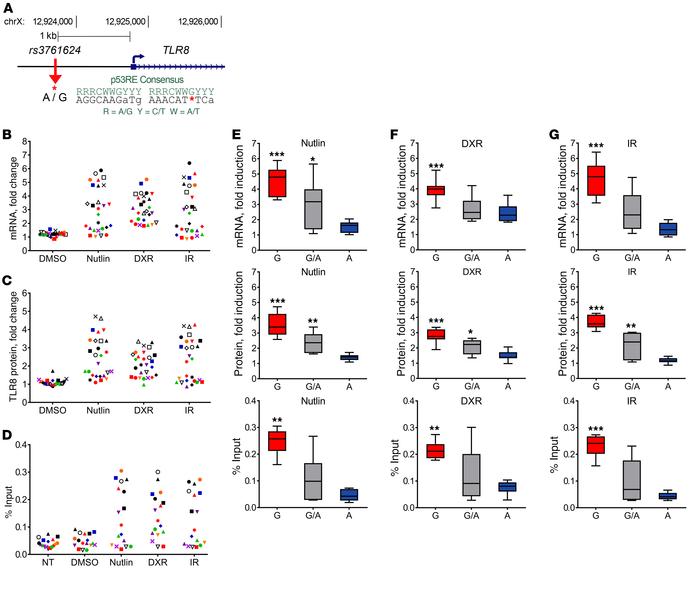