A better understanding of all immune components involved in protecting against Mycobacterium tuberculosis infection is urgently needed to inform strategies for novel immunotherapy and tuberculosis (TB) vaccine development. Although cell-mediated immunity is critical, increasing evidence supports that antibodies also have a protective role against TB. Yet knowledge of protective antigens is limited. Analyzing sera from 97 US immigrants at various stages of M. tuberculosis infection, we showed protective in vitro and in vivo efficacy of polyclonal IgG against the M. tuberculosis capsular polysaccharide arabinomannan (AM). Using recently developed glycan arrays, we established that anti-AM IgG induced in natural infection is highly heterogeneous in its binding specificity and differs in both its reactivity to oligosaccharide motifs within AM and its functions in bacillus Calmette-Guérin vaccination and/or in controlled (latent) versus uncontrolled (TB) M. tuberculosis infection. We showed that anti-AM IgG from asymptomatic but not from diseased individuals was protective and provided data suggesting a potential role of IgG2 and specific AM oligosaccharides. Filling a gap in the current knowledge of protective antigens in humans, our data support the key role of the M. tuberculosis surface glycan AM and suggest the importance of targeting specific glycan epitopes within AM in antibody-mediated immunity against TB.

Significant correlations between IgG reactivity to specific AM OS motifs and Ab-mediated Mtb phagocytosis with TST+IGRA+ but not TB sera. 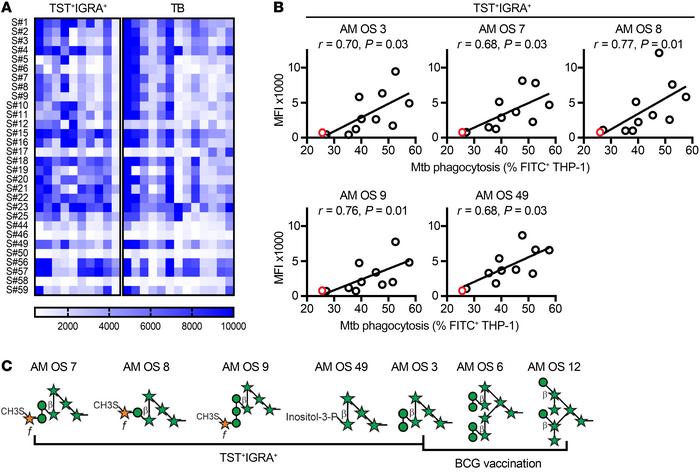 () Heterogeneous serum IgG reactivity to AM OS in both TST+IGRA+ and TB groups. Color features represent the mean fluorescence intensity (MFI) to each of the OS motifs. TST+IGRA+ subjects recognized many AM OS motifs with the same intensity as TB subjects (10% of color features in the TST+IGRA+ group and 9% of color features in the TB group exceeded the upper scale limit). Sera lined from left to right had IgG reactivity to native AM from high to low (minimum OD > 0.4). Compound S#46 is an OS motif of the mycobacterial capsular PS α-glucan, which served as a control. () Significant correlations between IgG reactivity to AM OS and Mtb phagocytosis were seen for 5 OSs with TST+IGRA+ ( = 10) but none of the 30 OSs with TB sera ( = 13; see also ). Spearman’s rank correlation. Red circles, TST– control serum. () The 5 AM OSs recognized by TST+IGRA+ sera and significantly associated with Mtb phagocytosis share a common motif of 4 Ara residues (green stars) attached in the same configuration, β-(1→2), α-(1→5), α-(1→5), and further functionalized with additional mannose (green circles), inositol phosphate, or xylose (orange stars) residues. IgG reactivity to AM OSs 3, 6, and 12 also correlated with BCG phagocytosis in our prior studies with BCG immune sera (). OS 3 recognition is significantly associated with phagocytosis with both TST+IGRA+ and BCG sera, while significant association with the other 2 motifs ( and ) was only seen with BCG immune sera.