A HS diet plus CNO increases blood pressure in mice. 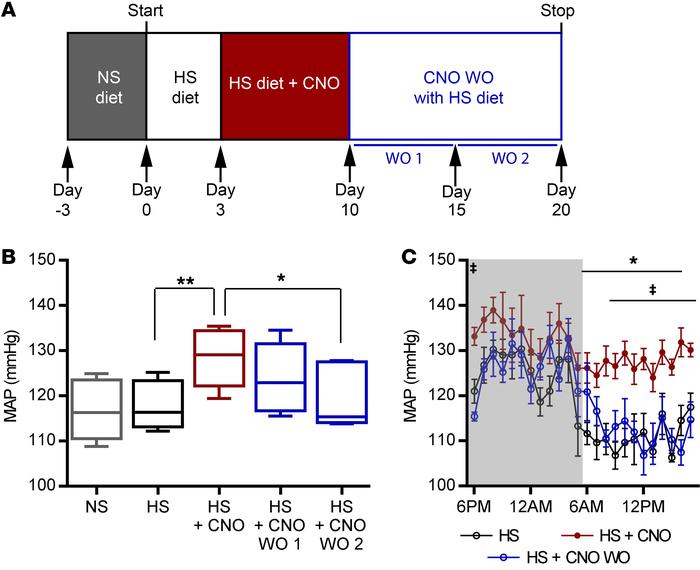 () Experimental protocol. Female 20-week-old mice ( = 5) were implanted with a radiotelemetric device and given 2 weeks for recovery. The final 4 days prior to treatment were analyzed as the baseline. Mice were then fed a HS diet for 3 days, HS plus CNO for 7 days, and HS alone (CNO washout) for 10 days. MAP was continuously recorded throughout the experiment. () Average MAP in the NS diet, HS diet, HS plus CNO, and HS plus CNO washout treatment periods (separated into 2 consecutive 5-day periods). Data in represent the interquartile range with the median (box) and the minimum and maximum (whiskers). () Hourly MAP overlaid for the same mice using the final 24 hours of a HS diet alone (black circles), the second day of HS plus CNO treatment (day 4 in , red circles), and the seventh day of HS plus CNO washout. The gray box signifies the dark (active) period. The second day of HS plus CNO treatment was chosen to allow orally given CNO to raise aldosterone levels. Data in represent the mean ± SEM for the mice for each hour. () * < 0.05 and ** < 0.01, by repeated-measures 1-way ANOVA with Bonferroni’s correction. () * < 0.05, for the HS diet versus HS plus CNO; ‡ < 0.05, for HS plus CNO versus HS plus CNO washout; by repeated-measures 2-way ANOVA with Bonferroni’s correction.