Pattern recognition receptors (PRRs) are crucial for responses to infections and tissue damage; however, their role in autoimmunity is less clear. Herein we demonstrate that 2 C-type lectin receptors (CLRs) Mcl and Mincle play an important role in the pathogenesis of experimental autoimmune encephalomyelitis (EAE), an animal model of multiple sclerosis (MS). Congenic rats expressing lower levels of Mcl and Mincle on myeloid cells exhibited a drastic reduction in EAE incidence. In vivo silencing of Mcl and Mincle or blockade of their endogenous ligand SAP130 revealed that these receptors’ expression in the central nervous system is crucial for T cell recruitment and reactivation into a pathogenic Th17/GM-CSF phenotype. Consistent with this, we uncovered MCL- and MINCLE-expressing cells in brain lesions of MS patients and we further found an upregulation of the MCL/MINCLE signaling pathway and an increased response following MCL/MINCLE stimulation in peripheral blood mononuclear cells from MS patients. Together, these data support a role for CLRs in autoimmunity and implicate the MCL/MINCLE pathway as a potential therapeutic target in MS. 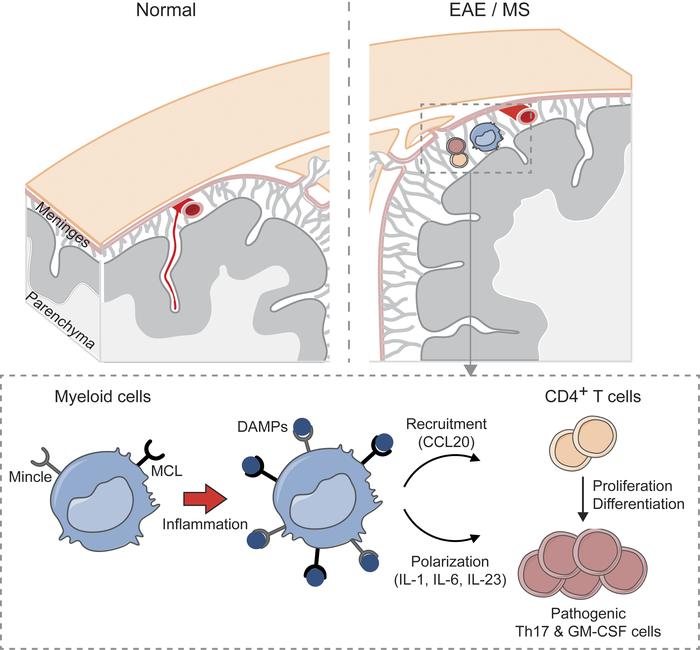