DCs undergo metabolic reprogramming from a predominantly oxidative phosphorylation (OXPHOS) to glycolysis to mount an immunogenic response. The mechanism underpinning the metabolic reprogramming remains elusive. We demonstrate that miRNA-142 (miR-142) is pivotal for this shift in metabolism, which regulates the tolerogenic and immunogenic responses of DCs. In the absence of miR-142, DCs fail to switch from OXPHOS and show reduced production of proinflammatory cytokines and the ability to activate T cells in vitro and in in vivo models of sepsis and alloimmunity. Mechanistic studies demonstrate that miR-142 regulates fatty acid (FA) oxidation, which causes the failure to switch to glycolysis. Loss- and gain-of-function experiments identified carnitine palmitoyltransferase -1a (CPT1a), a key regulator of the FA pathway, as a direct target of miR-142 that is pivotal for the metabolic switch. Thus, our findings show that miR-142 is central to the metabolic reprogramming that specifically favors glycolysis and immunogenic response by DCs.

FA uptake is increased in DCs. 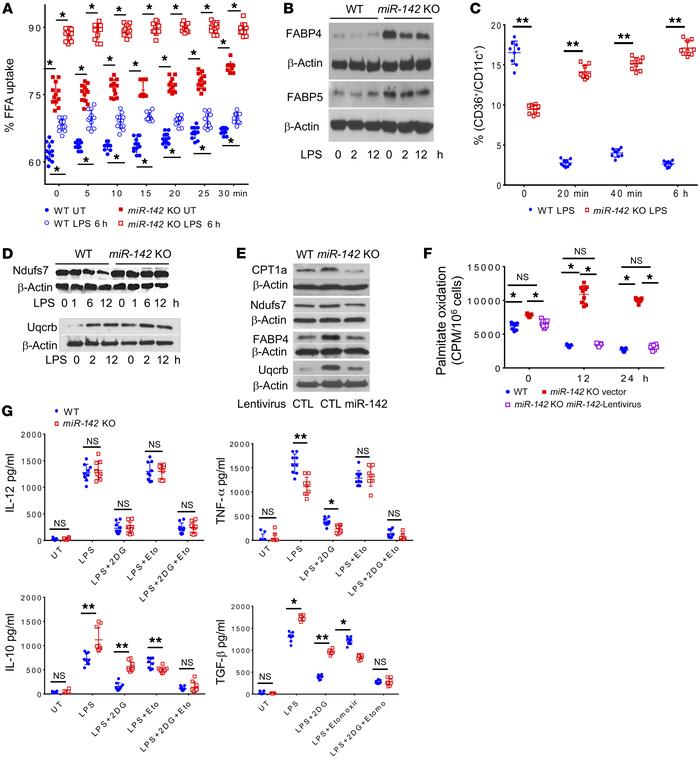 () WT and DCs were treated with diluent control or LPS for 6 hours. FA uptake at 20-second intervals for 30 minutes was determined, as described in Methods. Data from 3 similar experiments were combined (mean ± SEM). (–) WT and DCs were treated with LPS for the indicated times and analyzed by immunoblotting for FABP4, FABP5, β-actin (), or by FACS for CD36 expression (). Data from 3 similar experiments were combined (mean ± SEM), and immunoblotting was performed using Abs against Ndufs7, Uqcrb, and β-actin (). Representative blots are shown. () DCs were transfected with lentiviral miR-142 or control vectors as described in Methods. Cell lysates were processed for immunoblotting using Abs against CPT1a, FABP4, Ndufs7, Uqcrb, and β-actin. A representative blot is shown. () WT and DCs were transfected with lentiviruses expressing miR-142 or control, treated with LPS for indicated times, then processed for FAO assay. Data from 2 similar experiment were combined (mean ± SEM). Comparisons between 2 groups at multiple time points were calculated utilizing multiple tests (Holm-Šidák method). * < 0.05; ** < 0.01.