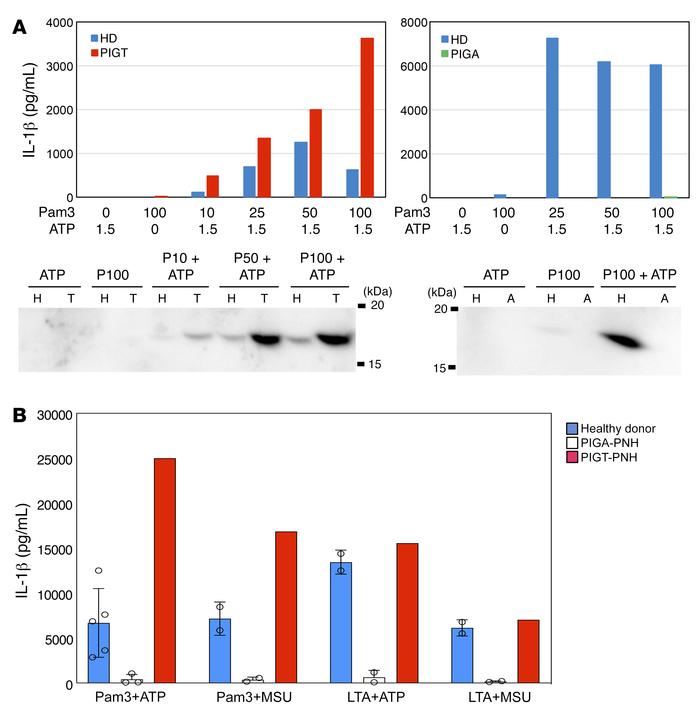 () The peripheral blood mononuclear cells from JI, PIGA-PNH4, and a healthy individual were incubated with 10–100 ng/mL Pam3CSK4 (Pam3) at 37°C for 4 hours, and then were incubated with 1.5 mM ATP for 30 minutes. IL-1β in the supernatants was measured by ELISA (top) and Western blotting (bottom). (Left) J1 (red bars) and a healthy individual (blue bars). (Right) PIGA-PNH4 (green bars) and a healthy individual (blue bars). P10, P50, and P100, 10, 50, and 100 ng/mL Pam3CSK4, respectively; H, healthy donors; T, PIGT-PNH; A, PIGA-PNH. () The peripheral blood mononuclear cells from J1, 2 or 3 patients with PIGA-PNH, and 2 or 5 healthy controls were stimulated with 200 ng/mL of Pam3 or 1 μg/mL of lipoteichoic acid (LTA) from for 4 hours at 37°C, and after washing were incubated with 3 mM ATP or 200 μg/mL monosodium ureate (MSU) for 4 hours at 37°C. IL-1β secreted into the medium was determined by ELISA. Data for healthy donors and PIGA-PNH were shown as mean ± SD. Cells from 3 patients with PIGA-PNH (PIGA-PNH4-6) secreted very low levels of IL-1β (403 ± 326 pg/mL) after stimulation of NLRP3-inflammasomes with Pam3CSK4 and ATP under these strong conditions. In contrast, cells from PIGT-PNH J1 secreted IL-1β at a high level (25,000 pg/mL), a level that is higher than those from 3 healthy donors (6693 ± 1711 pg/mL). Similar results were obtained by stimulation with Pam3CSK4 and MSU instead of ATP. Moreover, similar results were obtained by stimulation with LTA plus ATP or MSU.