Genetic abnormalities in patients with PIGT-PNH. 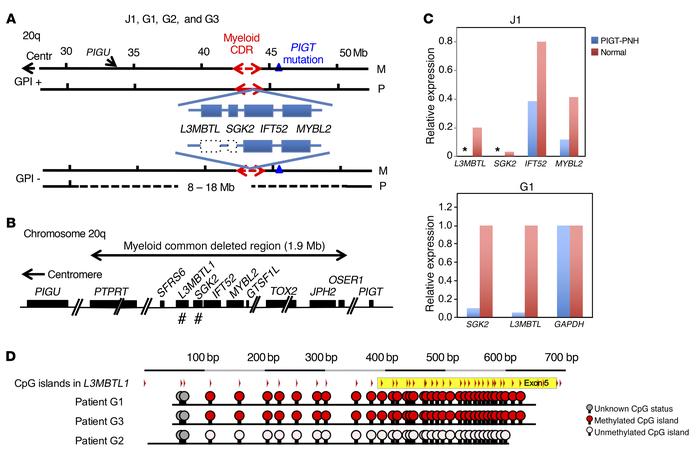 () PIGT mutations in GPI-AP–positive (GPI +) and –defective (GPI –) cells from patients with PIGT-PNH. (Top) GPI + cells from patients J1, G1, G2, and G3 had a germline mutation (triangle) in the maternal (M) allele. Two maternally imprinted genes, and , within myeloid common deleted region (CDR) are expressed from the paternal (P) allele. Solid and broken red double arrows, P and M alleles of myeloid CDR, respectively. (Bottom) GPI blood cells from PIGT-PNH patients had an 8 Mb to 18 Mb deletion spanning myeloid CDR and and/or in the P chromosome 20q leading to losses of expression of and genes (dotted boxes). () A 1.9-Mb region in chromosome 20q spanning gene to gene is termed myeloid common deleted region. and genes are approximately 1.2 Mb telomeric and 7.4 Mb centromeric to the myeloid CDR, respectively. and genes marked # are maternally imprinted. () qRT-PCR analysis of genes within myeloid CDR in GPI-AP–defective granulocytes from J1 and granulocytes from a healthy control (top) and whole blood cells from G1 and a healthy control (bottom). and , maternally imprinted genes; and , nonimprinted genes. Relative expression is determined taking means of ABL levels as 1 (J1) or of as 1 (G1). Blue bars, cells from J1 and G1; orange bars, cells from healthy individuals; * indicates below detection limits. Mean of duplicate (JI) and triplicate (G1) samples in 1 of the 2 independent experiments. Mean RQ max values for J1 samples were 0.15 () and 0.17 (), and for normal control samples were 0.034 (), 0.003 (), 0.078 (), and 0.002 (). Mean RQ max values for G1 samples were 0.01 (), 0.004 (), and 0.01 (), and for normal control samples were 0.08 (), 0.22 (), and 0.002 (). () Methylation status of the CpG islands in in G1, G2, and G3. Red, methylated CpG islands; pink, unmethylated CpG islands; gray, unknown CpG islands. Bisulfite sequencing data are shown in .