Current thalassemia gene therapy protocols require the collection of hematopoietic stem/progenitor cells (HSPCs), in vitro culture, lentivirus vector transduction, and retransplantation into myeloablated patients. Because of cost and technical complexity, it is unlikely that such protocols will be applicable in developing countries, where the greatest demand for a β-thalassemia therapy lies. We have developed a simple in vivo HSPC gene therapy approach that involves HSPC mobilization and an intravenous injection of integrating HDAd5/35++ vectors. Transduced HSPCs homed back to the bone marrow, where they persisted long-term. HDAd5/35++ vectors for in vivo gene therapy of thalassemia had a unique capsid that targeted primitive HSPCs through human CD46, a relatively safe SB100X transposase–based integration machinery, a micro-LCR–driven γ-globin gene, and an MGMT(P140K) system that allowed for increasing the therapeutic effect by short-term treatment with low-dose O6-benzylguanine plus bis-chloroethylnitrosourea. We showed in “healthy” human CD46–transgenic mice and in a mouse model of thalassemia intermedia that our in vivo approach resulted in stable γ-globin expression in the majority of circulating red blood cells. The high marking frequency was maintained in secondary recipients. In the thalassemia model, a near-complete phenotypic correction was achieved. The treatment was well tolerated. This cost-efficient and “portable” approach could permit a broader clinical application of thalassemia gene therapy. 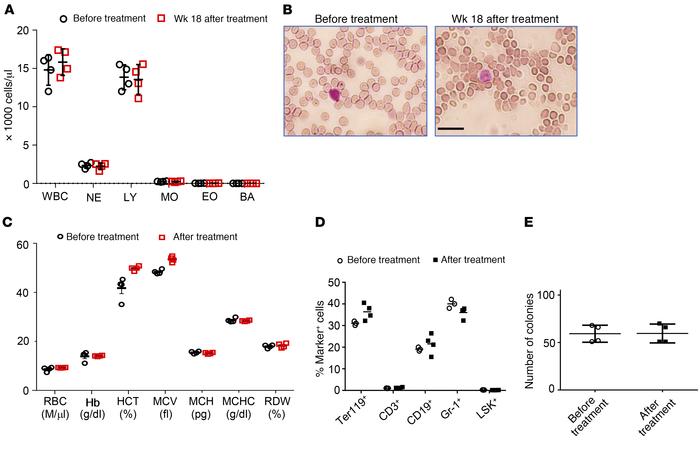