No recovery of replication-competent HIV-1 from human liver macrophages

No recovery of replication-competent HIV-1 from human liver macrophages

Long-lived HIV-1 reservoirs that persist despite antiretroviral therapy (ART) are a major impediment to a cure for HIV-1. We examined whether human liver macrophages (LMs), the largest tissue macrophage population, comprise an HIV-1 reservoir. We purified LMs from liver explants and included treatment with a T cell immunotoxin to reduce T cells to 1% or less. LMs were purified from 9 HIV-1–infected persons, 8 of whom were on ART (range 8–140 months). Purified LMs were stimulated ex vivo and supernatants from 6 of 8 LMs from persons on ART transmitted infection. However, HIV-1 propagation from LMs was not sustained except in LMs from 1 person taking ART for less than 1 year. Bulk liver sequences matched LM-derived HIV-1 in 5 individuals. Additional in vitro experiments undertaken to quantify the decay of HIV-1–infected LMs from 3 healthy controls showed evidence of infection and viral release for prolonged durations (>170 days). Released HIV-1 propagated robustly in target cells, demonstrating that viral outgrowth was observable using our methods. The t1/2 of HIV-1–infected LMs ranged from 3.8–55 days. These findings suggest that while HIV-1 persists in LMs during ART, it does so in forms that are inert, suggesting that they are defective or restricted with regard to propagation. 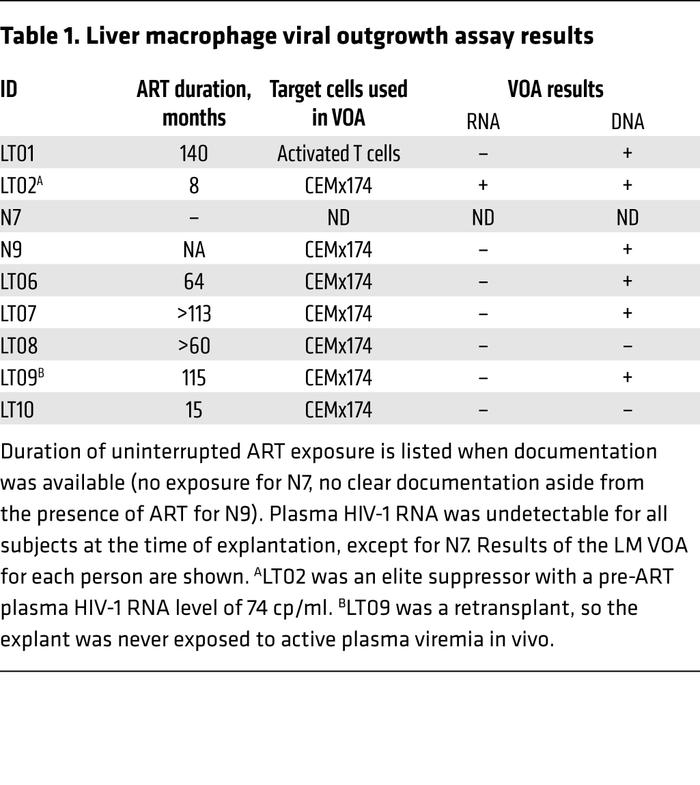