Despite its success in treating melanoma and hematological malignancies, adoptive cell therapy (ACT) has had only limited effects in solid tumors. This is due in part to a lack of specific antigen targets, poor trafficking and infiltration, and immunosuppression in the tumor microenvironment. In this study, we combined ACT with oncolytic virus vaccines (OVVs) to drive expansion and tumor infiltration of transferred antigen-specific T cells and demonstrated that the combination is highly potent for the eradication of established solid tumors. Consistent with other successful immunotherapies, this approach elicited severe autoimmune consequences when the antigen targeted was a self-protein. However, modulation of IFN-α/-β signaling, either by functional blockade or rational selection of an OVV backbone, ameliorated autoimmune side effects without compromising antitumor efficacy. Our study uncovers a pathogenic role for IFN-α/-β in facilitating autoimmune toxicity during cancer immunotherapy and presents a safe and powerful combinatorial regimen with immediate translational applications. 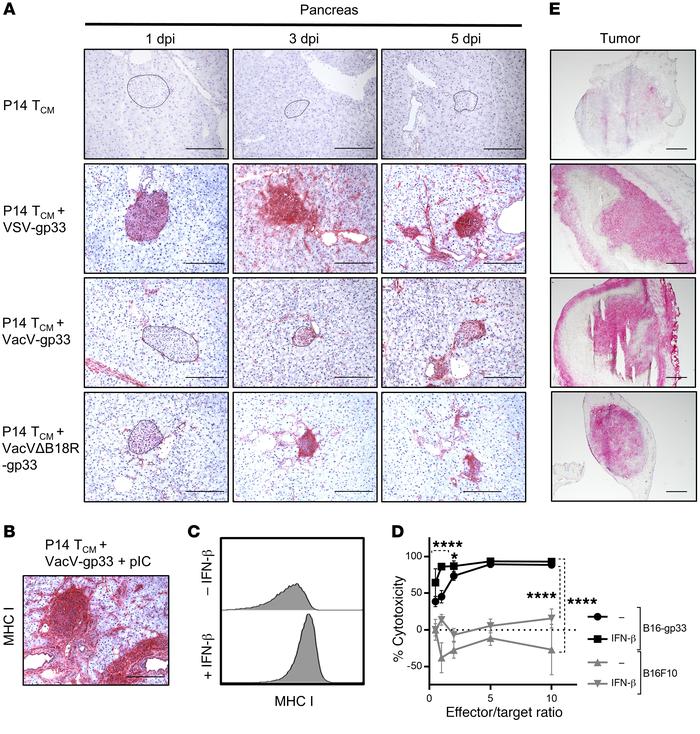 () Immunohistochemical staining of pancreatic tissues from treated RIP-gp mice showed increased MHC I expression on islets after VSV-gp33 and VacVΔB18R-gp33 treatment but only low MHC I expression levels on islet cells after treatment with VacV-gp33–based combination therapy. () Pancreatic islets showed intense MHC I staining upon i.p. injection with pIC on day 5 after treatment with the VacV-based combination therapy. Scale bar: 20 μm. () Flow cytometric evaluation of B16-gp33 cells treated in vitro with IFN-β showed upregulation of MHC I expression. () Combination therapy–generated cytotoxicity of CD8+ T cells on B16-gp33 cells but not gp33-negative B16F10 cells after pretreatment with IFN-β ( = 10). * < 0.05 and **** < 0.0001 by 2-way ANOVA with Holm-Sidak correction for multiple comparisons. () Tumor tissues from treated mice showed similar MHC I expression profiles when probed immunohistochemically, regardless of the viral vector used. Scale bars: 50 μm.