BACKGROUND. Injectable depot medroxyprogesterone acetate (DMPA) is one of the most popular contraception methods in areas of high HIV seroprevalence. Evidence is accumulating that use of DMPA might be associated with an increased risk of HIV-1 acquisition by women; however, mechanisms of this association are not completely understood. The goal of this study was to gain insight into mechanisms underlying the possible link between use of DMPA and risk of HIV-1 acquisition, exploring transcription profiling of ectocervical tissues. METHODS. Healthy women received either DMPA (n = 31) or combined oral contraceptive (COC), which has not been linked to an increased risk of HIV acquisition (n = 32). We conducted a comparative microarray-based whole-genome transcriptome profiling of human ectocervical tissues before and after 6 weeks of hormonal contraception use. RESULTS. The analysis identified that expression of 235 and 76 genes was significantly altered after DMPA and COC use, respectively. The most striking effect of DMPA, but not COC, was significantly altered expression (mostly downregulation) of many genes strategically involved in the maintenance of mucosal barrier function; the alterations, as indicated by Ingenuity Pathway Analysis (IPA), were most likely due to the DMPA-induced estrogen deficiency. Furthermore, IPA predicted that transcriptome alterations related to ectocervical immune responses were in general compatible with an immunosuppressive effect of DMPA, but, in some women, also with an inflammatory-like response. CONCLUSION. Our results suggest that impairment of cervicovaginal mucosal integrity in response to DMPA administration is an important mechanism contributing to the potential increased risk of HIV-1 acquisition in DMPA users. TRIAL REGISTRATION. ClinicalTrials.gov NCT01421368. FUNDING. This study was supported by the United States Agency for International Development (USAID) under Cooperative Agreement GPO-A-00-08-00005-00. 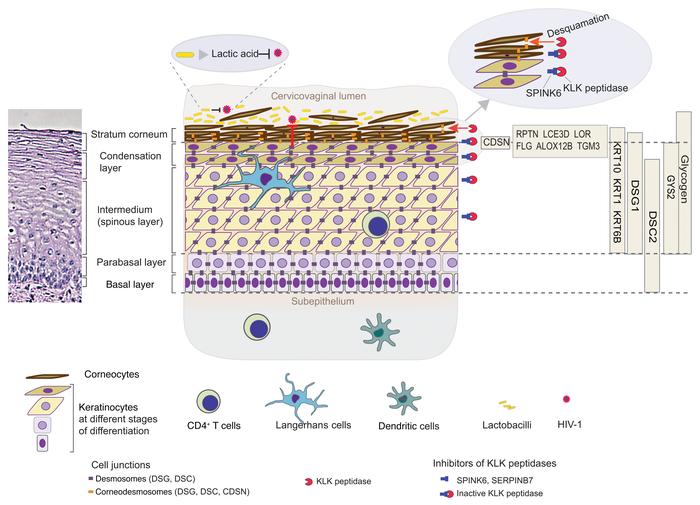 Healthy cervicovaginal epithelium presents an effective barrier against HIV-1 transmission. The epithelium consists of several layers of continuously differentiating keratinocytes interconnected by cell junctional structures. The outermost epithelial layer, the stratum corneum (SC), is the first physical barrier for most microorganisms. Proteins such as RPTN, FLG, LCE3D, LOR, TGM3, and ALOX12B are essential in maintaining the SC. Corneocytes form the SC and are joined by corneodesmosomes, cell junctional structures whose intercellular part consists of DSG, DSC, and CDSN, proteins that are degraded by KLK peptidases in the uppermost part of the SC to promote cell separation and shedding. The multiple keratinocyte layers beneath the SC present the next level of physical protection due to strong cytoskeleton supported by KRTs and cell junctional structures, largely desmosomes, the transmembrane part of which is formed by DSGs and DSCs. Activities of KLK peptidases beneath the SC are suppressed by serine protease inhibitors including SPINKs and SERPINs. In addition to physical barriers, spp., which are most often the dominant types of bacteria in healthy vaginal lumen, produce lactic acid — a factor that is involved in direct anti–HIV-1 activity. Vaginal colonization and lactic acid production by lactobacilli depend on available glycogen synthesized by keratinocyte GYS2. The expression pattern of epithelial barrier–related proteins, encoded by genes differentially expressed in DMPA users, is shown on the right. Only potential HIV-1 target immune cells are shown for simplicity.