Abnormal alternative splicing (AS) caused by alterations to splicing factors contributes to tumor progression. Serine/arginine splicing factor 1 (SRSF1) has emerged as a key oncodriver in numerous solid tumors, leaving its roles and mechanisms largely obscure in glioma. Here, we demonstrate that SRSF1 is increased in glioma tissues and cell lines. Moreover, its expression was correlated positively with tumor grade and Ki-67 index, but inversely with patient survival. Using RNA-Seq, we comprehensively screened and identified multiple SRSF1-affected AS events. Motif analysis revealed a position-dependent modulation of AS by SRSF1 in glioma. Functionally, we verified that SRSF1 promoted cell proliferation, survival, and invasion by specifically switching the AS of the myosin IB (MYO1B) gene and facilitating the expression of the oncogenic and membrane-localized isoform, MYO1B-fl. Strikingly, MYO1B splicing was dysregulated in parallel with SRSF1 expression in gliomas and predicted the poor prognosis of the patients. Further investigation revealed that SRSF1-guided AS of the MYO1B gene increased the tumorigenic potential of glioma cells through the PDK1/AKT and PAK/LIMK pathways. Taken together, we identify SRSF1 as an important oncodriver that integrates AS control of MYO1B into promotion of gliomagenesis and represents a potential prognostic biomarker and target for glioma therapy. 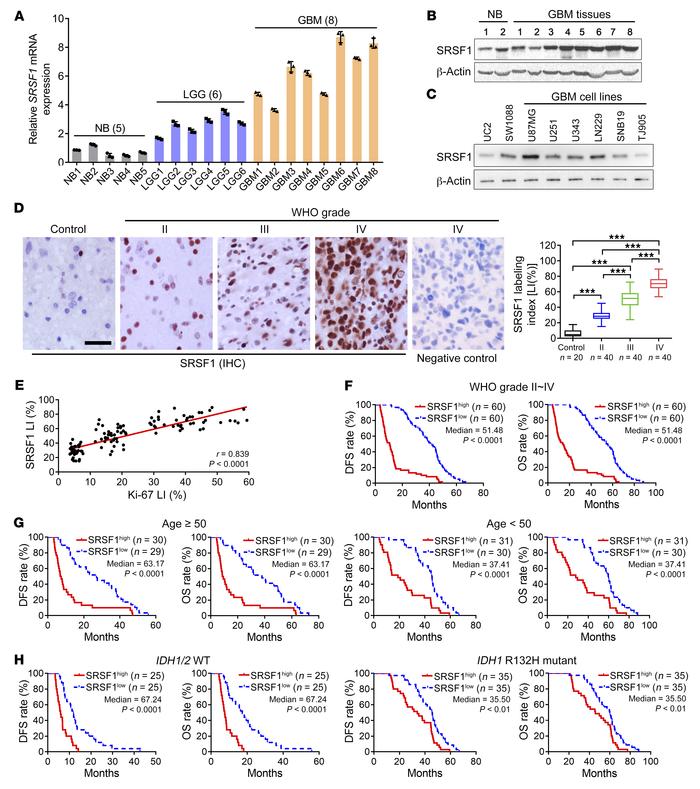 () Relative mRNA levels in glioma tissues as detected by qRT-PCR. The mean of the normal brain (NB) group was arbitrarily set to 1.0. Data are presented as mean ± SD, = 3. ( and ) Western blot of SRSF1. The expression levels of SRSF1 were compared between GBM tissues and NBs (), as well as among the GBM cell lines, UC2 (an immortal astrocyte cell line) and SW1088 (an anaplastic astrocytoma cell line, WHO grade III) (). Loading control: β-actin. () Left: IHC staining of SRSF1 in control (nontumoral brain tissues) and glioma tissues. The negative control was established by using PBS as a substitute for the primary antibody. Scale bar: 20 μm. Right: Comparison of SRSF1 expression levels among 20 NB tissues and 120 gliomas of various grades. The expression levels are represented by labeling indexes (LIs [%]), which were calculated with Leica Image Pro Plus 5.0 software as the percentage of total cells that were positive cells. Data are presented as box plots. Boxes represent the 25th and 75th percentiles, lines represent the median, and whiskers show the minimum and maximum points. *** < 0.001 by 1-way ANOVA with Tukey’s post test. () Pearson correlation analysis between the LIs of SRSF1 and Ki-67 in the glioma samples ( = 120). Pearson correlation test, and values are shown. (–) Kaplan-Meier analyses of the DFS and OS of all glioma patients () and patients of similar age () and identical gene status (). Patients were stratified into high- and low-expression groups using the medians of the SRSF1 LIs of the corresponding cohorts as cutoffs. The values of the log-rank (Mantel-Cox) tests are presented.