Amylin secretion from the rat pancreas and its selective loss after streptozotocin treatment.

Find articles by Ogawa, A. in: JCI | PubMed | Google Scholar

Amylin, a peptide copackaged with insulin in beta-cell granules, was measured in the effluent of the perfused rat pancreases by means of a newly developed specific radioimmunoassay. Its secretion parallels that of insulin in response to 20 mM glucose, 10 mM arginine, or the combination thereof. The relative molar amount of secreted amylin was estimated to be 25-37% that of insulin. Treatment with a borderline diabetogenic dose of streptozotocin reduced amylin response without significantly changing the insulin response. A severely diabetogenic dose of streptozotocin totally abolished amylin release and markedly reduced insulin release. The selective impairment of amylin secretion in streptozotocin-treated rats could represent an early manifestation of beta-cell depletion or injury. 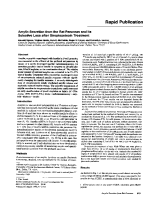 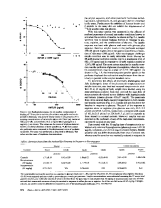 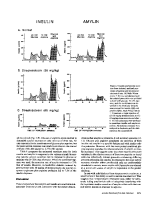 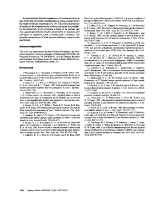