Hypocalcemia may not be essential for the development of secondary hyperparathyroidism in chronic renal failure.

Hypocalcemia is the main factor responsible for the genesis of secondary hyperparathyroidism in chronic renal disease. Studies with parathyroid cells obtained from uremic patients indicate that there is a shift in the set point for calcium-regulated hormone (parathyroid hormone [PTH] secretion. Studies were performed in dogs to further clarify this new potential mechanism. Hypocalcemia was prevented in uremic dogs by the administration of a high calcium diet. Initially, ionized calcium was 4.79 +/- 0.09 mg/dl and gradually increased up to 5.30 +/- 0.05 mg/dl. Despite a moderate increase in ionized calcium, immunoreactive PTH (iPTH) increased from 64 +/- 7.7 to 118 +/- 21 pg/ml. Serum 1,25(OH)2D3 decreased from 25.4 +/- 3.8 to 12.2 +/- 3.6 pg/ml. Further studies were performed in two other groups of dogs. One group received 150-200 ng and the second group 75-100 ng of 1,25(OH)2D3 twice daily. The levels of 1,25(OH)2D3 increased from 32.8 +/- 3.5 to a maximum of 69.6 +/- 4.4 pg/ml. In the second group the levels of serum 1,25(OH)2D3 after nephrectomy remained normal during the study. Amino-terminal iPTH did not increase in either of the two groups treated with 1,25(OH)2D3. In summary, the dogs at no time developed hypocalcemia; however, there was an 84% increase in iPTH levels, suggesting that hypocalcemia, per se, may not be the only factor responsible for the genesis of secondary hyperparathyroidism. 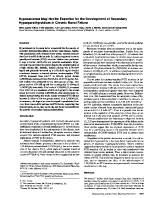 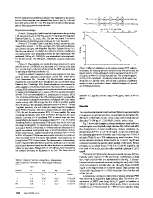 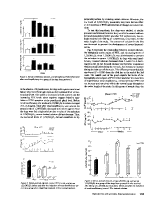 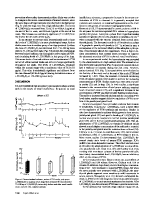 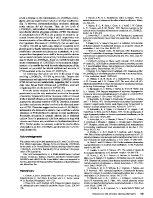 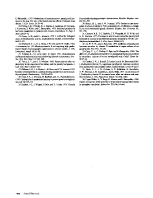