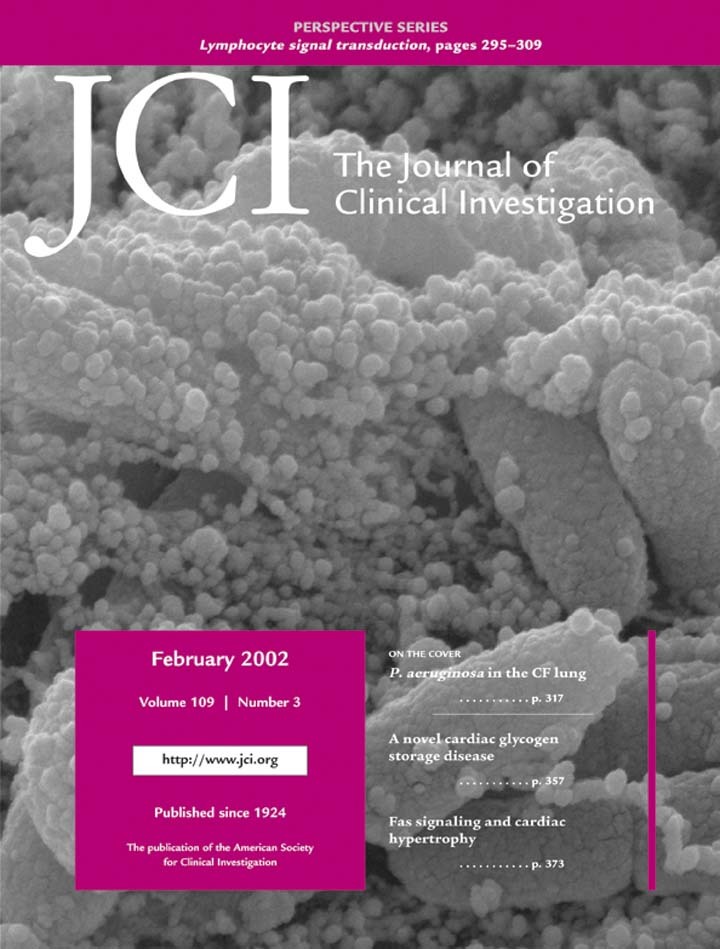 The challenge of target sequence specificity in C→U RNA editing

The challenge of target sequence specificity in C→U RNA editing

Activation and inhibition of lymphocytes by costimulation

Activation and inhibition of lymphocytes by costimulation

Kenneth A. Frauwirth, Craig B. Thompson

Putting the neo into neoangiogenesis

Putting the neo into neoangiogenesis

The murine VEGF gene is alternatively transcribed to yield the VEGF120, VEGF164, and VEGF188 isoforms, which differ in their potential to bind to heparan sulfate and neuropilin-1 and to stimulate endothelial growth. Here, their role in retinal vascular development was studied in mice selectively expressing single isoforms. VEGF164/164 mice were normal, healthy, and had normal retinal angiogenesis. In contrast, VEGF120/120 mice exhibited severe defects in vascular outgrowth and patterning, whereas VEGF188/188 mice displayed normal venular outgrowth but impaired arterial development. It is noteworthy that neuropilin-1, a receptor for VEGF164, was predominantly expressed in retinal arterioles. These findings reveal distinct roles of the various VEGF isoforms in vascular patterning and arterial development in the retina.

This study demonstrates that a CD34–, vascular endothelial cadherin– (VE-cadherin–), AC133+, and fetal liver kinase+ (Flk1+) multipotent adult progenitor cell (MAPC) that copurifies with mesenchymal stem cells from postnatal human bone marrow (BM) is a progenitor for angioblasts. In vitro, MAPCs cultured with VEGF differentiate into CD34+, VE-cadherin+, Flk1+ cells — a phenotype that would be expected for angioblasts. They subsequently differentiate into cells that express endothelial markers, function in vitro as mature endothelial cells, and contribute to neoangiogenesis in vivo during tumor angiogenesis and wound healing. This in vitro model of preangioblast-to-endothelium differentiation should prove very useful in studying commitment to the angioblast and beyond. In vivo, MAPCs can differentiate in response to local cues into endothelial cells that contribute to neoangiogenesis in tumors. Because MAPCs can be expanded in culture without obvious senescence for more than 80 population doublings, they may be an important source of endothelial cells for cellular pro- or anti-angiogenic therapies.

During the development of skeletal muscle, myoblasts withdraw from the cell cycle and differentiate into myotubes. The insulin-like growth factors IGF-I and IGF-II, through their cognate tyrosine kinase receptor (IGF-I receptor), are known to play a role in this process. After withdrawal of myoblasts from the cell cycle, IGF-I promotes muscle differentiation by inducing the expression or activity of myogenic regulatory factors (MyoD, myogenin) and effectors (p21). However, little is known about the intracellular mechanisms by which the IGF-I system regulates these factors during the process of myogenesis. Here we show that MKR mice, which express a dominant negative IGF-I receptor specifically in skeletal muscle, have marked muscle hypoplasia from birth to 3 weeks of age. This hypoplasia occurs concomitantly with a decrease in ERK immunoreactivity levels and decreases in MyoD and myogenin expression. BrdU immunocytochemistry showed a compensatory hyperplasia as MKR mice grew to adulthood. Interestingly, hyperplasia occurred concomitantly with an increase in p38, MyoD, myogenin, and p21 immunoreactivity levels, as well as a decrease in Twist levels. These findings suggest that regulation of these cellular elements by IGF-I may play a role in the development and differentiation of skeletal muscle in vivo.

Mutations in PRKAG2, the gene for the γ2 regulatory subunit of AMP-activated protein kinase, cause cardiac hypertrophy and electrophysiologic abnormalities, particularly preexcitation (Wolff-Parkinson-White syndrome) and atrioventricular conduction block. To understand the mechanisms by which PRKAG2 defects cause disease, we defined novel mutations, characterized the associated cardiac histopathology, and studied the consequences of introducing these mutations into the yeast homologue of PRKAG2, Snf4. Although the cardiac pathology caused by PRKAG2 mutations Arg302Gln, Thr400Asn, and Asn488Ile include myocyte enlargement and minimal interstitial fibrosis, these mutations were not associated with myocyte and myofibrillar disarray, the pathognomonic features of hypertrophic cardiomyopathy caused by sarcomere protein mutations. Instead PRKAG2 mutations caused pronounced vacuole formation within myocytes. Several lines of evidence indicated these vacuoles were filled with glycogen-associated granules. Analyses of the effects of human PRKAG2 mutations on Snf1/Snf4 kinase function demonstrated constitutive activity, which could foster glycogen accumulation. Taken together, our data indicate that PRKAG2 mutations do not cause hypertrophic cardiomyopathy but rather lead to a novel myocardial metabolic storage disease, in which hypertrophy, ventricular pre-excitation and conduction system defects coexist.

Leukocyte recruitment in inflammation is critical for host defense, but excessive accumulation of inflammatory cells can lead to tissue damage. Neutrophil-derived serine proteases (cathepsin G [CG], neutrophil elastase [NE], and proteinase 3 [PR3]) are expressed specifically in mature neutrophils and are thought to play an important role in inflammation. To investigate the role of these proteases in inflammation, we generated a mouse deficient in dipeptidyl peptidase I (DPPI) and established that DPPI is required for the full activation of CG, NE, and PR3. Although DPPI–/– mice have normal in vitro neutrophil chemotaxis and in vivo neutrophil accumulation during sterile peritonitis, they are protected against acute arthritis induced by passive transfer of monoclonal antibodies against type II collagen. Specifically, there is no accumulation of neutrophils in the joints of DPPI–/– mice. This protective effect correlates with the inactivation of neutrophil-derived serine proteases, since NE–/– × CG–/– mice are equally resistant to arthritis induction by anti-collagen antibodies. In addition, protease-deficient mice have decreased response to zymosan- and immune complex–mediated inflammation in the subcutaneous air pouch. This defect is accompanied by a decrease in local production of TNF-α and IL-1β. These results implicate DPPI and polymorphonuclear neutrophil–derived serine proteases in the regulation of cytokine production at sites of inflammation.

Congestive heart failure is a leading cause of mortality in developed countries. Myocardial hypertrophy resulting from hypertension often precedes heart failure. Understanding the signaling underlying cardiac hypertrophy and failure is of major interest. Here, we identified Fas receptor activation, a classical death signal causing apoptosis via activation of the caspase cascade in many cell types, as a novel pathway mediating cardiomyocyte hypertrophy in vitro and in vivo. Fas activation by Fas ligand induced a hypertrophic response in cultured cardiomyocytes, which was dependent on the inactivation of glycogen synthase kinase 3β (GSK3β) by phosphorylation. In vivo, lpr (lymphoproliferative disease) mice lacking a functional Fas receptor demonstrated rapid-onset left ventricular dilatation and failure, absence of compensatory hypertrophy, and significantly increased mortality in response to pressure overload induction that was accompanied by a failure to inhibit GSK3β activity. In contrast, Fas ligand was dispensable for the development of pressure overload hypertrophy in vivo. In vitro, neonatal cardiomyocytes from lpr mice showed a completely abrogated or significantly blunted hypertrophic response after stimulation with Fas ligand or angiotensin II, respectively. These findings indicate that Fas receptor signaling inhibits GSK3β activity in cardiomyocytes and is required for compensation of pressure overload in vivo.

Platelet/endothelial cell adhesion molecule-1 (PECAM-1, CD31), a 130-kDa glycoprotein member of the Ig superfamily of transmembrane proteins, is expressed on endothelial cells, platelets, and subsets of leukocytes. It functions as a cell adhesion molecule as well as a scaffolding molecule capable of modulating cellular signaling pathways. In this study, using PECAM-1–deficient (KO) mice, as well as cells derived from these mice, we demonstrate that the absence of PECAM-1 expression is associated with an early onset of clinical symptoms during experimental autoimmune encephalomyelitis (EAE), a mouse model for the human autoimmune disease multiple sclerosis. During EAE, mononuclear cell extravasation and infiltration of the CNS occur at earlier time points in PECAM-KO mice than in wild-type mice. In vitro, T lymphocyte transendothelial migration across PECAM-KO endothelial cells is enhanced, regardless of expression of PECAM-1 on transmigrating T cells. Additionally, cultured PECAM-KO endothelial cells exhibit prolonged permeability changes in response to histamine treatment compared with PECAM-1–reconstituted endothelial cells. Lastly, we demonstrate an exaggerated and prolonged CNS vascular permeability during the development of EAE and a delay in restoration of dermal vascular integrity following histamine challenge in PECAM-KO mice.

Heart failure is characterized by depressed contractility and delayed repolarization. The latter feature predisposes the failing heart to ventricular arrhythmias and represents a logical target for gene therapy. Unfortunately, unopposed correction of the delay in repolarization will decrease the time available for calcium cycling during each heartbeat, potentially aggravating the depression of contractility. Here we describe the development and application of a novel gene therapy strategy designed to abbreviate excitation without depressing contraction. The calcium ATPase SERCA1 was coexpressed with the potassium channel Kir2.1 in guinea pig hearts. Myocytes from the hearts had bigger calcium transients and shorter action potentials. In vivo, repolarization was abbreviated, but contractile function remained unimpaired. Dual gene therapy of the sort described here can be generalized to exploit opposing or synergistic therapeutic principles to achieve a tailored phenotype.

Regulation of prostasin by aldosterone in the kidney

Regulation of prostasin by aldosterone in the kidney

Prostasin is a serine protease present in mammalian urine that increases the activity of the epithelial sodium channel (ENaC) when the two are coexpressed in Xenopus oocytes. To determine if aldosterone, one of the principal regulators of urinary Na reabsorption by the distal nephron, affects prostasin expression, we examined prostasin mRNA and protein in a cultured mouse cortical collecting duct cell line (M-1), whole rats, and patients with primary aldosteronism. Aldosterone treatment of M-1 cells substantially increased prostasin expression and stimulated 22Na uptake. Urinary excretion of prostasin in rats that were infused with aldosterone likwise increased by ∼4-fold when compared with the vehicle-infused rats. Finally, urinary excretion of prostasin in patients with primary aldosteronism was substantially increased when compared with normal patients. Adrenalectomy reduced urinary prostasin excretion to control levels, whereas urinary prostasin levels were not altered in patients undergoing surgery for other reasons. In patients with primary aldosteronism, reduction in the urinary excretion of prostasin correlated with the increase in the urinary Na/K ratio. These findings, together with our previous report that prostasin activates the amiloride-sensitive Na currents through ENaC, demonstrate that prostasin regulates Na balance in vivo by virtue of its heightened expression in the presence of aldosterone.

Autologous dendritic cells (DCs) transfected with mRNA encoding prostate-specific antigen (PSA) are able to stimulate potent, T cell–mediated antitumor immune responses in vitro. A phase I trial was performed to evaluate this strategy for safety, feasibility, and efficacy to induce T cell responses against the self-protein PSA in patients with metastatic prostate cancer. In 13 study subjects, escalating doses of PSA mRNA–transfected DCs were administered with no evidence of dose-limiting toxicity or adverse effects, including autoimmunity. Induction of PSA-specific T cell responses was consistently detected in all patients, suggesting in vivo bioactivity of the vaccine. Vaccination was further associated with a significant decrease in the log slope PSA in six of seven subjects; three patients that could be analyzed exhibited a transient molecular clearance of circulating tumor cells. The demonstration of vaccine safety, successful in vivo induction of PSA-specific immunity, and impact on surrogate clinical endpoints provides a scientific rationale for further clinical investigation of RNA-transfected DCs in the treatment of human cancer.

Activation of NF-κB by bacterial LPS promotes the upregulation of proinflammatory cytokines that contribute to the pathogenesis of Gram-negative septic shock. LPS activation of NF-κB is dependent upon the interaction of two death domain–containing (DD-containing) proteins, MyD88 and IL-1 receptor–associated kinase IRAK. Another DD-containing protein, Fas-associated death domain (FADD), also binds MyD88 through respective DD-DD interactions. Although FADD has been classically described as a proapoptotic signaling molecule, several reports have implicated a role for FADD in mediating NF-κB activation. In the present report, we investigated whether FADD could mediate LPS activation of NF-κB. Overexpression of FADD blocked LPS-induced NF-κB activation, whereas absence of FADD enhanced activation of NF-κB by LPS. Further, LPS-induced expression of two NF-κB–dependent gene products, IL-6 and KC, was enhanced in FADD–/– mouse embryo fibroblasts (MEFs) compared with wild-type. This increase in NF-κB activity correlated with enhanced IκB degradation. FADD–/– MEFs were also resistant to NF-κB activation induced by IL-1β. Finally, reconstitution of full-length FADD in the FADD–/– MEFs completely reversed the enhanced activation of NF-κB elicited by either LPS or IL-1β. Together, these data indicate that FADD negatively regulates LPS- and IL-1β–induced NF-κB activation and that this regulation occurs upstream of IκB degradation.