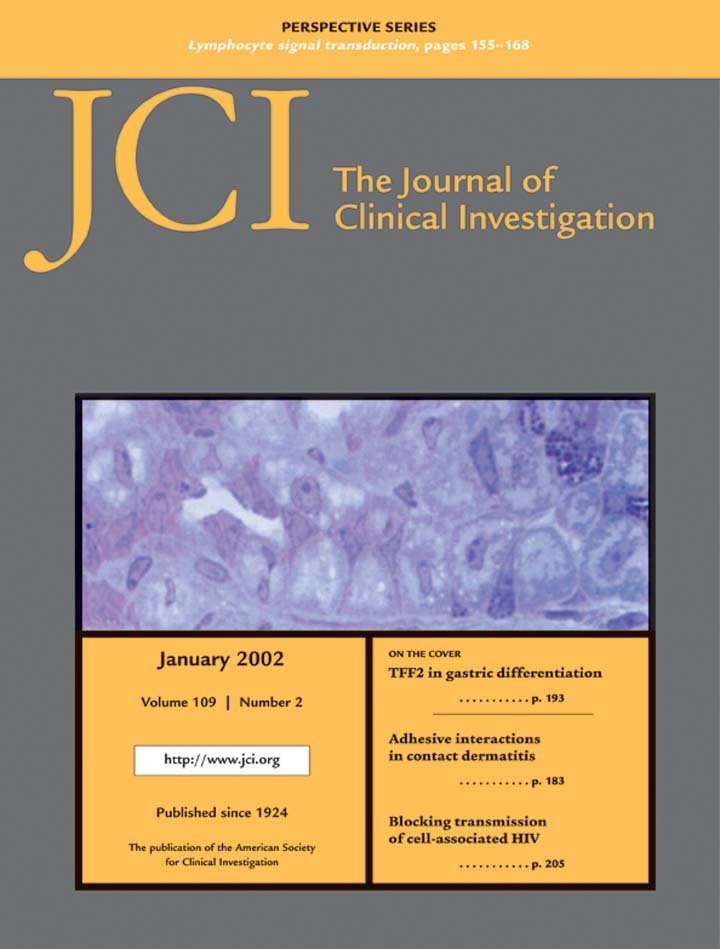 Letter to the Editor

ITAMs versus ITIMs: striking a balance during cell regulation

ITAMs versus ITIMs: striking a balance during cell regulation

Clearing the way to implantation

Clearing the way to implantation

Acyl CoA:diacylglycerol acyltransferase (DGAT) is a ubiquitously expressed enzyme that catalyzes the final reaction in the major pathways of triglyceride synthesis. Mice lacking DGAT1 (Dgat–/–) demonstrate significant changes in lipid metabolism in several tissues, including the skin. Here we report the effects of DGAT1 deficiency on fur and sebaceous glands. Adult Dgat–/– mice had dry fur and hair loss, which were associated with atrophic sebaceous glands and fur lipid abnormalities. As a result, Dgat–/– mice had impaired water repulsion and defective thermoregulation after water immersion. These phenotypes were mostly absent in Dgat–/– mice with leptin deficiency, indicating an unexpected role for leptin in modulating the skin phenotype. Our findings indicate that DGAT1 plays an important role in normal fur and sebaceous gland physiology and provide evidence that leptin modulates these processes in the skin.

β2 integrins are of critical importance for leukocyte extravasation through vascular endothelia and for T cell activation. To elucidate the role of β2 integrins in T cell–mediated immune responses, allergic contact dermatitis (ACD), irritant dermatitis, and delayed-type hypersensitivity (DTH) were assessed in mice lacking the β2 integrin subunit, CD18. ACD and DTH responses, but not edema formation, were severely suppressed in CD18–/– mice. Extravasation of CD18–/– T cells into eczematous skin lesions was greatly impaired, whereas migration of Langerhans cell precursors and dendritic cells was normal in CD18–/– mice. CD18–/–lymph nodes (LNs) contained an abnormal population of CD3–CD44high lymphocytes and showed evidence of widespread T cell activation. T cells from regional LNs of sensitized CD18–/– mice proliferated in response to hapten challenge, and subcutaneous injection of sensitized syngeneic LN cells directly into ears of hapten-challenged naive recipients restored the defective ACD in CD18–/– mice, suggesting that CD18 is not required for priming of naive T cells but is indispensable for T cell extravasation. Thus, a dysfunction of T cells, in addition to granulocytes, may contribute to the pathophysiology of leukocyte adhesion deficiency type I, which arises from mutations in the human CD18 gene.

Trefoil factor family 2 (TFF2), also known as spasmolytic polypeptide, is a member of the trefoil family of peptides and is expressed primarily in the mucous neck cells of the gastric mucosa. To study the physiologic role of TFF2, we have generated TFF2-deficient mice through targeted gene disruption. Homozygous mutant mice were viable and fertile without obvious gastrointestinal abnormalities. However, quantitative measurements revealed a significant decrease in gastric mucosal thickness and in gastric mucosal proliferation rates. In addition, there was a twofold increase in activated parietal cells resulting in a twofold increase in basal and stimulated gastric acid output and an undetectable serum gastrin level. The TFF2-deficient mice also showed a significant increase in the degree of gastric ulceration after administration of indomethacin. Taken together, these results suggest a physiologic role for TFF2 to promote mucosal healing through the stimulation of proliferation and downregulation of gastric acid secretion.

Vaginal transmission of cell-associated HIV-1 in the mouse is blocked by a topical, membrane-modifying agent

Vaginal transmission of cell-associated HIV-1 in the mouse is blocked by a topical, membrane-modifying agent

Heparin cofactor II (HCII) is a plasma protein that inhibits thrombin rapidly in the presence of dermatan sulfate, heparan sulfate, or heparin. HCII has been proposed to regulate coagulation or to participate in processes such as inflammation, atherosclerosis, and wound repair. To investigate the physiologic function of HCII, about 2 kb of the mouse HCII gene, encoding the N-terminal half of the protein, was deleted by homologous recombination in embryonic stem cells. Crosses of F1HCII+/– animals produced HCII–/– offspring at the expected mendelian frequency. Biochemical assays confirmed the absence of dermatan sulfate–dependent thrombin inhibition in the plasma of HCII–/– animals. Crosses of HCII–/– animals produced litters similar in size to those obtained from heterozygous matings. At 1 year of age, HCII-deficient animals were grossly indistinguishable from their wild-type littermates in weight and survival, and they did not appear to have spontaneous thrombosis or other morphologic abnormalities. In comparison with wild-type animals, however, they demonstrated a significantly shorter time to thrombotic occlusion of the carotid artery after photochemically induced endothelial cell injury. This abnormality was corrected by infusion of purified HCII but not ovalbumin. These observations suggest that HCII might inhibit thrombosis in the arterial circulation.

Hepatitis C virus (HCV) is a major cause of chronic hepatitis worldwide, but the study of HCV infection has been hampered by the lack of an in vitro or in vivo small animal model. The tree shrew Tupaia belangeri is susceptible to infection with a variety of human viruses in vivo, including hepatitis viruses. We show that primary Tupaia hepatocytes can be infected with serum- or plasma-derived HCV from infected humans, as measured by de novo synthesis of HCV RNA, analysis of viral quasispecies evolution, and detection of viral proteins. Production of infectious virus could be demonstrated by passage to naive hepatocytes. To assess whether viral entry in Tupaia hepatocytes was dependent on the recently isolated HCV E2 binding protein CD81, we identified and characterized Tupaia CD81. Sequence analysis of cloned Tupaia cDNA revealed a high degree of homology between Tupaia and human CD81 large extracellular loops (LEL). Cellular binding of E2 and HCV infection could not be inhibited by anti-CD81 antibodies or soluble CD81-LEL, suggesting that viral entry can occur through receptors other than CD81. Thus, primary Tupaia hepatocytes provide a potential model for the study of HCV infection of hepatocytes.

Experimental autoimmune encephalomyelitis (EAE) is a Th1-mediated demyelinating disease of the CNS with similarities to multiple sclerosis. We and others have shown that a short-term course of anti-CD154 mAb treatment to block CD154-CD40 interactions can be used to prevent or even treat ongoing PLP139-151–induced relapsing EAE. However, little is known of the long-term effects of CD154 blockade on the development of antigen-specific T cell function. Here, we show that short-term treatment with anti-CD154 at the time of PLP139-151/CFA immunization inhibits clinical disease for up to 100 days after immunization. At this point, comparable numbers of Th1 cells are observed in anti-CD154 and control Ig–treated mice, as assessed by antigen-specific ELISPOT assays. Thus, the long-term Th1/Th2 balance is largely unaffected. Inflammatory responses are diminished in anti-CD154–treated mice, as indicated by reduced in vivo delayed-type hypersensitivity and reduced levels of splenic IFN-γ secretion in vitro. However, upon adoptive transfer of T cells isolated from the spleens of anti-CD154–treated mice, these cells contributed as effectively to clinical disease as those obtained from control-treated mice. Thus, anti-CD154 therapy leads to long-term therapeutic efficacy without exerting a long-term influence on Th1 development.

Transglutaminase 1 (TGase 1) is one of the genes implicated in autosomal recessive congenital ichthyosis. Skin from TGase 1–/– mice, which die as neonates, lacks the normal insoluble cornified envelope and has impaired barrier function. Characterization of in situ dye permeability and transepidermal water loss revealed defects in the development of the skin permeability barrier in TGase 1–/– mice. In the stratum corneum of the skin, tongue, and forestomach, intercellular lipid lamellae were disorganized, and the corneocyte lipid envelope and cornified envelope were lacking. Neonatal TGase 1–/– mouse skin was taut and erythrodermic, but transplanted TGase 1–/– mouse skin resembled that seen in severe ichthyosis, with epidermal hyperplasia and marked hyperkeratosis. Abnormalities in those barrier structures remained, but transepidermal water loss was improved to control levels in the ichthyosiform skin. From these results, we conclude that TGase 1 is essential to the assembly and organization of the barrier structures in stratified squamous epithelia. We suggest that the ichthyosiform skin phenotype in TGase 1 deficiency develops the massive hyperkeratosis as a physical compensation for the defective cutaneous permeability barrier required for survival in a terrestrial environment.

The expression of chemokines and their receptors is thought to contribute to leukocyte infiltration and progressive renal fibrosis after unilateral ureter obstruction (UUO). We hypothesized that blocking the chemokine receptor CCR1 using the nonpeptide antagonist BX471 could reduce leukocyte infiltration and renal fibrosis after UUO. UUO kidneys from BX471-treated mice (day 0–10 and day 6–10) revealed a 40–60% reduction of interstitial macrophage and lymphocyte infiltrate compared with controls. Treated mice also showed a marked reduction of CCR1 and CCR5 mRNA levels, and FACS analysis showed a comparable reduction of CD8+/CCR5+ T cells. Markers of renal fibrosis, such as interstitial fibroblasts, interstitial volume, mRNA and protein expression for collagen I, were all significantly reduced by BX471-treatment compared with vehicle controls. By contrast treatment was ineffective when the drug was supplied only from days 0 to 5. In summary, blockade of CCR1 substantially reduces cell accumulation and renal fibrosis after UUO. Most interestingly, late onset of treatment is also effective. We therefore conclude that CCR1 blockade may represent a new therapeutic strategy for reducing cellular infiltration and renal fibrosis as major factors in the progression to end-stage renal failure.

Antigen administration via oral and other mucosal routes can suppress systemic immunity to the antigen and has been used to prevent experimental autoimmune disease. This approach may prove ineffective or even harmful if it leads to a concomitant induction of cytotoxic T lymphocytes (CTLs), and indeed, mucosal administration of the model antigen ovalbumin (OVA) has been shown to elicit CTL activation while simultaneously inducing oral tolerance. Here we show that induction by oral OVA of CTLs in wild-type mice, and of diabetes in mice expressing OVA transgenically in pancreatic β cells, can be prevented by transiently blocking the CD40 ligand (CD40L). However, CD40L blockade did not diminish oral tolerance, as measured by suppression of systemic OVA-primed T cell proliferation, IFN-γ secretion, and Ab production. Consistent with these findings, mice lacking CD40 expression could be orally tolerized to OVA. Transient CD40L blockade therefore dissociates pathogenic from protective immunity and should enhance the efficacy and safety of oral tolerance for preventing autoimmune disease.

Lutropin (LH) directs ovulation and implantation by regulating the production of estrogen and progesterone. We have shown that the circulatory half-life of LH is controlled by the Man/GalNAc-4-SO4 receptor, which binds GalNAc-4-SO4 on LH oligosaccharides. The short half-life in conjunction with episodic release of LH from the pituitary accounts for the pulsatile rise and fall in circulating LH. Complete genetic ablation of the Man/GalNAc-4-SO4 receptor results in death in utero. Heterozygous female mice clear LH from the circulation more slowly and have smaller litters due to a reduction in the rate of implantation. This reduction is fully correctable by exogenous progesterone and estrogen, indicating that the rate of LH clearance is critical for the production of sufficient progesterone and estrogen for implantation. Thus, the Man/GalNAc-4-SO4 receptor regulates the endocrinological status of the female and is essential for an early event in embryonic development.