Antigen administration via oral and other mucosal routes can suppress systemic immunity to the antigen and has been used to prevent experimental autoimmune disease. This approach may prove ineffective or even harmful if it leads to a concomitant induction of cytotoxic T lymphocytes (CTLs), and indeed, mucosal administration of the model antigen ovalbumin (OVA) has been shown to elicit CTL activation while simultaneously inducing oral tolerance. Here we show that induction by oral OVA of CTLs in wild-type mice, and of diabetes in mice expressing OVA transgenically in pancreatic β cells, can be prevented by transiently blocking the CD40 ligand (CD40L). However, CD40L blockade did not diminish oral tolerance, as measured by suppression of systemic OVA-primed T cell proliferation, IFN-γ secretion, and Ab production. Consistent with these findings, mice lacking CD40 expression could be orally tolerized to OVA. Transient CD40L blockade therefore dissociates pathogenic from protective immunity and should enhance the efficacy and safety of oral tolerance for preventing autoimmune disease. 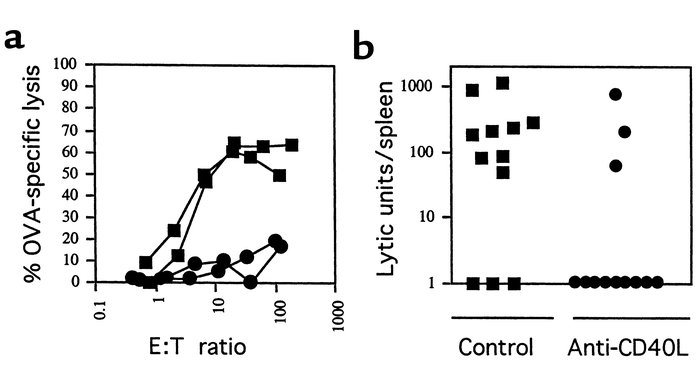