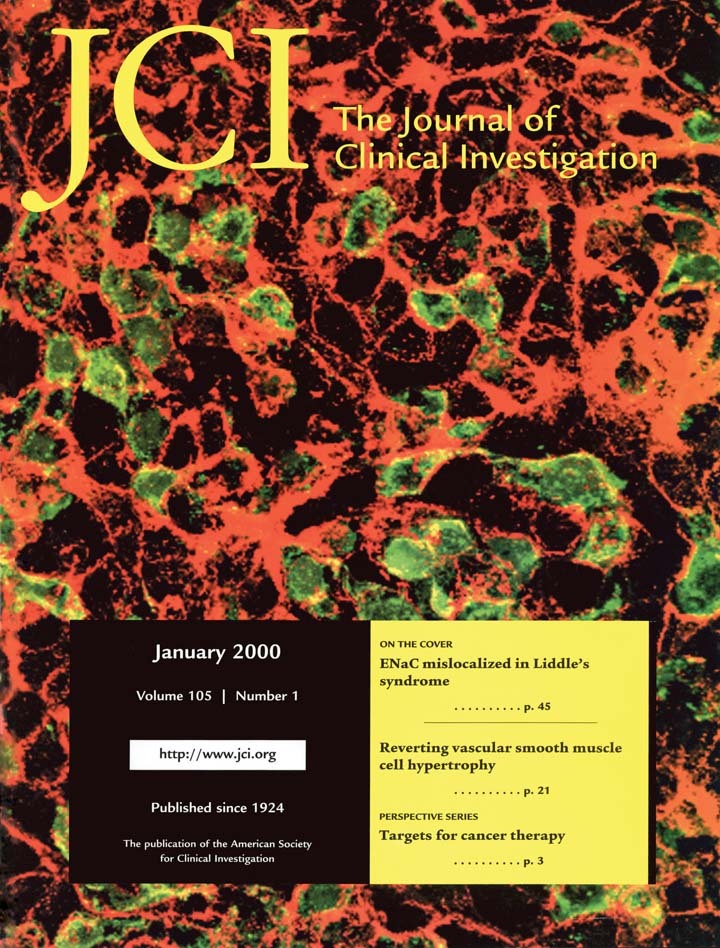 Aquaporins and the respiratory system: advice for a lung investigator

Aquaporins and the respiratory system: advice for a lung investigator

Increased expression of the glycoprotein tenascin-C (TN) is associated with progression of clinical and experimental pulmonary hypertension. In cultured smooth muscle cells (SMCs) TN is induced by matrix metalloproteinases (MMPs) and amplifies the proliferative response to growth factors. Conversely, suppression of TN leads to SMC apoptosis. We now report that hypertrophied rat pulmonary arteries in organ culture, which progressively thicken in association with cell proliferation and matrix accumulation, can be made to regress by inhibiting either serine elastases or MMPs. This effect is associated with reduced TN, suppression of SMC proliferation, and induction of apoptosis. Selective repression of TN by transfecting pulmonary arteries with antisense/ribozyme constructs also induces SMC apoptosis and arrests progressive vascular thickening but fails to induce regression. This failure is related to concomitant expansion of a SMC population, which produces an alternative cell survival αvβ3 ligand, osteopontin (OPN), in response to pro-proliferative cues provided by a proteolytic environment. OPN rescues MMP inhibitor–induced SMC apoptosis, and αvβ3 blockade induces apoptosis in hypertrophied arteries. Our data suggest that proteinase inhibition is a novel strategy to induce regression of vascular disease because this overcomes the pluripotentiality of SMC-matrix survival interactions and induces coordinated apoptosis and resorption of matrix.

Although mononuclear cell infiltration is a hallmark of cellular rejection of a vascularized allograft, efforts to inhibit rejection by blocking leukocyte-endothelial cell adhesion have proved largely unsuccessful, perhaps in part because of persistent generation of chemokines within rejecting grafts. We now provide, to our knowledge, the first evidence that in vivo blockade of specific chemokine receptors is of therapeutic significance in organ transplantation. Inbred mice with a targeted deletion of the chemokine receptor CCR1 showed significant prolongation of allograft survival in 4 models. First, cardiac allografts across a class II mismatch were rejected by CCR1+/+ recipients but were accepted permanently by CCR1–/– recipients. Second, CCR1–/– mice rejected completely class I– and class II–mismatched BALB/c cardiac allografts more slowly than control mice. Third, levels of cyclosporin A that had marginal effects in CCR1+/+ mice resulted in permanent allograft acceptance in CCR1–/– recipients. These latter allografts showed no sign of chronic rejection 50–200 days after transplantation, and transfer of CD4+ splenic T cells from these mice to naive allograft recipients significantly prolonged allograft survival, whereas cells from CCR1+/+ mice conferred no such benefit. Finally, both CCR1+/+ and CCR1–/– allograft recipients, when treated with a mAb to CD4, showed permanent engraftment, but these allografts showed florid chronic rejection in the former strain and were normal in CCR1–/– mice. We conclude that therapies to block CCR1/ligand interactions may prove useful in preventing acute and chronic rejection clinically.

The epithelial Na+ channel (ENaC) plays a critical role in Na+ absorption, and mutations in this channel cause diseases of Na+ homeostasis, including a genetic form of hypertension (Liddle’s syndrome). To investigate cAMP-mediated stimulation of ENaC, α, β, and γENaC were coexpressed in Fischer rat thyroid epithelia to generate apical Na+ channels and transepithelial Na+ current. cAMP agonists stimulated Na+ current by 70%. Following covalent modification of cysteines introduced into ENaC, cAMP increased the rate of appearance of unmodified channels at the cell surface. In addition, cAMP increased the fluorescent labeling of ENaC at the apical cell surface. Inhibition of vesicle trafficking by incubating epithelia at 15°C prevented the cAMP-mediated stimulation of ENaC. These results suggest that cAMP stimulates Na+ absorption in part by increasing translocation of ENaC to the cell surface. Stimulation of ENaC by cAMP was dependent on a sequence (PPPXY) in the COOH terminus of each subunit. This sequence is the target for mutations that cause Liddle’s syndrome, suggesting that cAMP-mediated translocation of ENaC to the cell surface is defective in this genetic form of hypertension.

Hepatitis B virus (HBV) is a small DNA virus with a compact genomic organization. All HBV proteins identified to date have been encoded by unspliced HBV RNAs. Spliced HBV RNAs have been described, but their functions are unknown. We show here that a singly spliced HBV RNA encodes a novel HBV protein in vivo. This HBV splice-generated protein (HBSP) corresponds to the fusion of a part of the viral polymerase and a new open reading frame that is created by the splicing event. In vivo, HBSP protein was found in HBV-infected liver samples, and anti-HBSP antibodies occurred in one-third of sera samples collected from chronic HBV carriers. In vitro, the ectopic expression of HBSP had no effect on viral DNA replication or transcription but induced cell apoptosis without a cell-cycle block. Overall, our results suggest that HBV has evolved a mechanism that directly modulates virus-cell interaction through RNA splicing.

T helper 2 (Th2) cells play a critical role in the pathogenesis of asthma, but the precise immunological mechanisms that inhibit Th2 cell function in vivo are not well understood. Using gene therapy, we demonstrated that ovalbumin-specific (OVA-specific) Th cells engineered to express latent TGF-β abolished airway hyperreactivity and airway inflammation induced by OVA-specific Th2 effector cells in SCID and BALB/c mice. These effects correlated with increased concentrations of active TGF-β in the bronchoalveolar lavage (BAL) fluid, demonstrating that latent TGF-β was activated in the inflammatory environment. In contrast, OVA-specific Th1 cells failed to inhibit airway hyperreactivity and inflammation in this system. The inhibitory effect of TGF-β–secreting Th cells was antigen-specific and was reversed by neutralization of TGF-β. Our results demonstrate that T cells secreting TGF-β in the respiratory mucosa can indeed regulate Th2-induced airway hyperreactivity and inflammation and suggest that TGF-β–producing T cells play an important regulatory role in asthma.

Interactions between the enteric pathogen Salmonella typhimurium and the luminal surface of the intestine provoke an acute inflammatory response, mediated in part by epithelial cell secretion of the chemokine IL-8 and other proinflammatory molecules. This study investigated the mechanism by which this pathogen induces IL-8 secretion in physiologically polarized model intestinal epithelia. IL-8 secretion induced by both the prototypical proinflammatory cytokine TNF-α and S. typhimurium was NF-κB dependent. However, NF-κB activation and IL-8 secretion induced by S. typhimurium, but not by TNF-α, was preceded by and required an increase in intracellular [Ca2+]. Additionally, agonists that increased intracellular [Ca2+] by receptor-dependent (carbachol) or independent (thapsigargin, ionomycin) means also induced IL-8 secretion. Furthermore, the ability of S. typhimurium mutants to induce IκB-α degradation, NF-κB translocation, and IL-8 transcription and secretion correlated precisely with their ability to induce an intracellular [Ca2+] increase in model intestinal epithelia, but not with their ability to invade these cells. Finally, S. typhimurium, but not TNF-α, induced a Ca2+-dependent phosphorylation of IκB-α. These results indicate that S. typhimurium–induced activation of NF-κB–dependent epithelial inflammatory responses proceeds by a Ca2+-mediated activation of an IκB-α kinase. These observations raise the possibility that pharmacologic intervention of the acute inflammatory response can be selectively matched to the specific class of initiating event.

The mammalian lung expresses water channel aquaporin-1 (AQP1) in microvascular endothelia, AQP4 in airway epithelia, and AQP5 at the apical plasma membrane in type I cells of alveolar epithelia. We previously studied the role of AQP1 and AQP4 in lung fluid transport using knockout mice. Here, we examined the role of AQP5 using AQP5 knockout mice, which were recently shown to manifest defective saliva secretion. AQP5 deletion did not affect lung morphology at the light microscopic level, nor did it affect the distribution or expression of aquaporins 1, 3, or 4. Airspace-capillary osmotic water permeability (Pf) was measured in isolated perfused lungs by pleural surface fluorescence and gravimetric methods. Pf was reduced 10-fold by AQP5 deletion and was further reduced by 2- to 3-fold in AQP1/AQP5 double-knockout mice. Hydrostatic lung edema in response to acute increases in pulmonary artery pressure was not affected by AQP5 deletion. Active alveolar fluid absorption was measured in an in situ lung model from the increase in concentration of a volume marker in an isosmolar alveolar instillate. Interestingly, fluid absorption did not differ in litter-matched AQP5 knockout mice, nor was there an effect of AQP5 deletion when fluid absorption was maximally stimulated by pretreatment of mice with keratinocyte growth factor. These results indicate that AQP5 is responsible for the majority of water transport across the apical membrane of type I alveolar epithelial cells. The unimpaired alveolar fluid clearance in AQP5-null mice indicates that high alveolar water permeability is not required for active, near-isosmolar fluid transport.

Stromal cell–derived factor-1 (SDF-1) provides a potent chemotactic stimulus for CD34+ hematopoietic cells. We cultured mobilized peripheral blood (PB) and umbilical cord blood (CB) for up to 5 weeks and examined the migratory activity of cobblestone area–forming cells (CAFCs) and long-term culture–initiating cells (LTC-ICs) in a transwell assay. In this system, SDF-1 or MS-5 marrow stromal cells placed in the lower chamber induced transmembrane and transendothelial migration by 2- and 5-week-old CAFCs and LTC-ICs in 3 hours. Transmigration was blocked by preincubation of input CD34+ cells with antibody to CXCR4. Transendothelial migration of CB CAFCs and LTC-ICs was higher than that of PB. We expanded CD34+ cells from CB in serum-free medium with thrombopoietin, flk-2 ligand, and c-kit ligand, with or without IL-3 and found that CAFCs cultured in the absence of IL-3 had a chemotactic response equivalent to noncultured cells, even after 5 weeks. However, addition of IL-3 to the culture reduced this response by 20–50%. These data indicate that SDF-1 induces chemotaxis of primitive hematopoietic cells signaling through CXCR4 and that the chemoattraction could be downmodulated by culture ex vivo.

Bullous pemphigoid (BP) is an autoimmune skin disease characterized by subepidermal blisters and autoantibodies against 2 hemidesmosome-associated proteins, BP180 and BP230. The immunopathologic features of BP can be reproduced in mice by passive transfer of anti-BP180 antibodies. Lesion formation in this animal model depends upon complement activation and neutrophil recruitment. In the present study, we investigated the role of neutrophil elastase (NE) in antibody-induced blister formation in experimental BP. Abnormally high levels of caseinolytic activity, consistent with NE, were detected in extracts of lesional skin and blister fluid of mice injected with anti-BP180 IgG. The pathogenic anti-BP180 IgG failed to induce subepidermal blistering in NE-null (NE–/–) mutant mice. NE–/– mice reconstituted with neutrophils from wild-type mice became susceptible to experimental BP. Wild-type mice given NE inhibitors (α1-proteinase inhibitor and Me-O-Suc-Ala-Ala-Pro-Val-CH2Cl), but not mice given cathepsin G/chymase inhibitors (α1-antichymotrypsin or Z-Gly-Leu-Phe-CH2Cl), were resistant to the pathogenic activity of anti-BP180 antibodies. Incubation of murine skin with NE induced BP-like epidermal-dermal detachment. Finally, NE cleaved BP180 in vitro and in vivo. These results implicate NE directly in the dermal-epidermal cleavage induced by anti-BP180 antibodies in the experimental BP model.