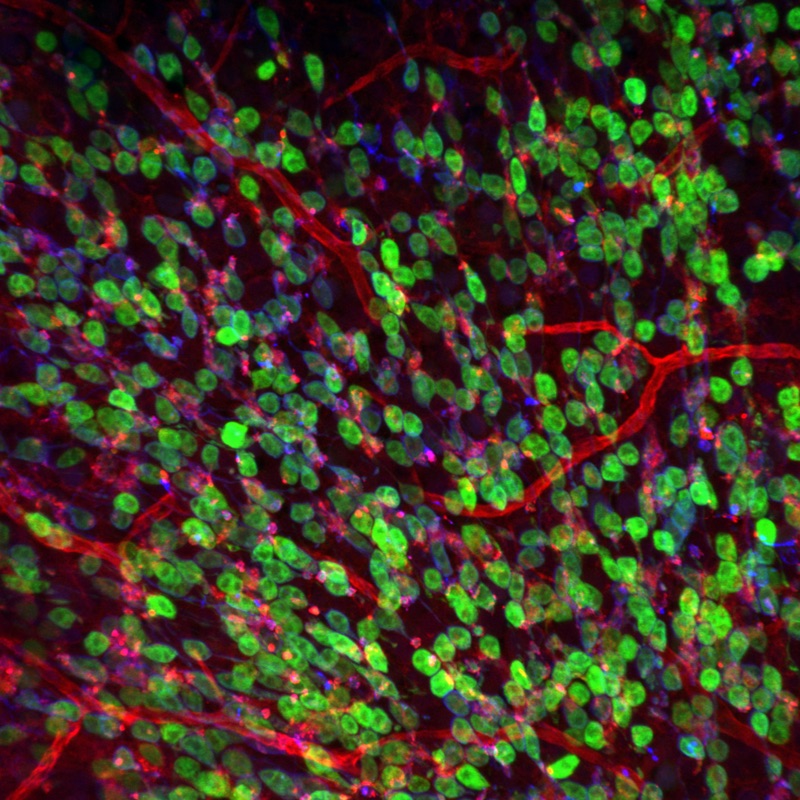 Retinitis pigmentosa (RP) is an inherited retinal degeneration disease that is characterized by progressive night blindness followed by loss of daylight vision. RP results from mutations that promote the loss of rod photoreceptors, which are required for vision in low light. The subsequent death of cone photoreceptors, which mediate daylight vision, results from rod degeneration, rather than the direct effects of genetic lesions. Previous studies have implicated oxidative stress in cone death; however, small-molecule antioxidants have been unsuccessful in ameliorating cone loss. Wenjun Xiong and colleagues at Harvard Medical School developed an adeno-associated viral (AAV) vector-based approach to deliver genes encoding antioxidant enzymes and transcription factors directly to the eye. Of those tested, the gene encoding the master antioxidant transcription factor NRF2 provided the best protection against cone loss in three distinct murine models of RP. AAV-NRF2 reduced oxidative stress, leading to prolonged cone photoreceptor survival, preserved cone structure, and enhanced visual acuity. In a murine model of acute nerve injury, AAV-NRF2 enhanced the survival of retinal ganglion cells. Together, these data suggest that AAV-NRF2 has potential as a therapeutic approach to enhance neuron survival n a variety of oxidative stress-associated neurodegenerative conditions. .The accompanying image shows cone photoreceptor morphology, with residual light-sensing outer segments in a mouse model of RP after AAV-NRF2 treatment. The cone photoreceptors are marked by AAV-mediated GFP expression (green), and the cone outer segments are labeled with peanut agglutinin (red) and short- and medium-wavelength opsin (blue) staining.

Watch the authors of this paper discuss their work.

Oxidative stress contributes to the loss of neurons in many disease conditions as well as during normal aging; however, small-molecule agents that reduce oxidation have not been successful in preventing neurodegeneration. Moreover, even if an efficacious systemic reduction of reactive oxygen and/or nitrogen species (ROS/NOS) could be achieved, detrimental side effects are likely, as these molecules regulate normal physiological processes. A more effective and targeted approach might be to augment the endogenous antioxidant defense mechanism only in the cells that suffer from oxidation. Here, we created several adeno-associated virus (AAV) vectors to deliver genes that combat oxidation. These vectors encode the transcription factors NRF2 and/or PGC1a, which regulate hundreds of genes that combat oxidation and other forms of stress, or enzymes such as superoxide dismutase 2 (SOD2) and catalase, which directly detoxify ROS. We tested the effectiveness of this approach in 3 models of photoreceptor degeneration and in a nerve crush model. AAV-mediated delivery of NRF2 was more effective than SOD2 and catalase, while expression of PGC1a accelerated photoreceptor death. Since the NRF2-mediated neuroprotective effects extended to photoreceptors and retinal ganglion cells, which are 2 very different types of neurons, these results suggest that this targeted approach may be broadly applicable to many diseases in which cells suffer from oxidative damage.

The use of gene therapy for blinding disease shows growing promise; however, due to an ever-expanding list of disease-causing genes and mutations, the identification of a generic gene-based treatment is urgently needed. In many forms of degenerative retinal disease, there may be a window of opportunity to preserve daylight vision, as the cone photoreceptors degenerate more slowly than do the rods. In this issue of the , Venkatesh et al. and Xiong et al. exploit two different pathways to promote cone cell survival and preserve vision in murine retinal degeneration models. These studies provide hope for developing a universal reagent to treat many different blinding disorders.

Retinitis pigmentosa (RP) is an inherited photoreceptor degenerative disorder that results in blindness. The disease is often caused by mutations in genes that are specific to rod photoreceptors; however, blindness results from the secondary loss of cones by a still unknown mechanism. Here, we demonstrated that the mammalian target of rapamycin complex 1 (mTORC1) is required to slow the progression of cone death during disease and that constitutive activation of mTORC1 in cones is sufficient to maintain cone function and promote long-term cone survival. Activation of mTORC1 in cones enhanced glucose uptake, retention, and utilization, leading to increased levels of the key metabolite NADPH. Moreover, cone death was delayed in the absence of the NADPH-sensitive cell death protease caspase 2, supporting the contribution of reduced NADPH in promoting cone death. Constitutive activation of mTORC1 preserved cones in 2 mouse models of RP, suggesting that the secondary loss of cones is caused mainly by metabolic deficits and is independent of a specific rod-associated mutation. Together, the results of this study address a longstanding question in the field and suggest that activating mTORC1 in cones has therapeutic potential to prolong vision in RP.