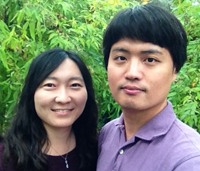 A research article in the December 2014 issue of the JCI explores the mechanisms underlying two commonly mutated genes in hereditary spastic paraplegia. The study, led by husband and wife Jaerak Chang and Seongju Lee, shows that the encoded proteins, spastizin and spatacsin, are essential for a process in the late stages of autophagy known as autophagic lysosome reformation (ALR), which leads to the generation of lysosomes that degrade unwanted intracellular material. We asked Dr. Chang and Dr. Lee for insights into how this project came together, their thoughts on extending their findings, and what it is like to be a married scientific team.

Can you tell us about yourselves, and your motivations for this project?

Jaerak Chang: My previous project was related to other forms of hereditary spastic paraplegia (HSP) and included research on the endoplasmic reticulum (ER) network. The study was specifically about the function of the spastic paraplegia (SPG) protein SPG33. Many other HSP-related proteins involved in ER shaping had been extensively studied, but less so in other cellular events including endosomal trafficking. Scientifically, the SPG15 protein, known as spastizin or ZFYVE26, based on the presence of a FYVE domain, has been very interesting to study. It is known to specifically interact with phosphatidylinositol 3-phosphate and thought to be involved in endosomal trafficking.

From a clinical standpoint, mutations in the SPG15 and SPG11 genes, the latter encoding spatacsin, were reported to share the same phenotype in regard to features such as retinal abnormalities and thin corpus callosum. We were fortunate to have access to patient fibroblasts to study the effect of losing SPG11 and SPG15 gene expression on cellular trafficking. Most of the previously published results on the SPG15 protein spastizin were equivocal and even controversial, and that was a big motivation for this project.

Seongju Lee: When Dr. Chang first started this project, I was working on a separate project on SPG proteins related to endosomal trafficking. When he found the lysosomal phenotype in spastizin or spatacsin, it was very interesting and really drew my attention. I subsequently joined this project, and we worked on it together.

How did having the direct access to patient fibroblasts in Dr. Blackstone’s laboratory impact your research?

Lee: It was very critical for this study. Dr. Blackstone is very supportive of our study of cell biology, and our lab is very well equipped to study the cellular functions of multiple proteins related to HSP, as well as for in vivo studies, and having access to patient samples really allowed for a more complete understanding of the disease process.

Did this research turn out the way you originally thought it would, or did you have other expectations?

Chang: We started this project around two-and-a-half years ago. In the beginning, we actually expected that spastizin would play a role in endosomal trafficking. The protein has a FYVE domain, as mentioned, and was thus felt to associate predominately or entirely with the endosomal compartment. However, our initial results directed us to focus on lysosomes and autophagy. We only saw limited colocalization with the endosome. Our initial interest in the FYVE domain as a determinate of function was not wrong. In the end, we found that this domain is critical for the localization and function of spastizin at the lysosome.

Lee: People have known which proteins can cause HSP but most were related to alterations in ER morphology. Our result is the first finding in which HSP could be caused by a primary lysosomal defect.

Is there one thing that you found throughout this research that was completely unexpected?

We could not find any significant lysosomal defect in AP-5–depleted cells. It was a different phenotype from cells depleted of spastizin or spatacsin. That is one of the unexpected results, but ultimately actually made some sense. For instance, others have found thin corpus callosum of patients carrying SPG11 and SGP15 mutations, but not those with mutations of AP-5 subunits. The MRI results seem quite different between the two groups. Even though these proteins may complex together, they may have different pathways to induce disease.

What was the biggest challenge that you had to overcome during this research?

Chang: Actually the biggest challenge of the whole project was when I found the accumulation of large LAMP1-positive organelles (LPO). The autophagosome was also accumulated in this patient and spastizin- or spatacsin-deficient cells. So I first expected that autophagosomes may fail to fuse with these lysosomes because autophagosome accumulation was caused by failure in fusion with lysosomes in many previous cases. However, I found that the fusion between autophagosomes and lysosomes occurred normally in this depleted cell line. I hypothesized that autophagosomes may not be functional in these cells, and tried to find abnormalities of the fused autolysosome even though they physically fused together.

But all the data indicated that autolysosomes were absolutely normal, in terms of the lysosome. I could not find anything to show any defects of these cells. I searched the literature related to the lysosome enlargement to try to explain this very strange phenotype. I found one paper, which was published in 2010 by Dr. Yu and his colleagues from the NIH in Nature (1). The paper was about autophagic lysosome reformation (ALR), a totally new mechanism of lysosome biogenesis. Fortunately, we could demonstrate that all phenotypes were actually caused by a failure in ALR.

Lee: For me, we had another challenge after this. The phenotype was related to ALR. The next question was: How can we connect these proteins with the autophagic lysosome reformation players, which were already known? I checked so many players related to ALR. I especially focused on the relationship to phosphatidylinositols and phosphatidylinositol kinases. I tried to determine the protein level or localization of these proteins after depleting spastizin or spatacsin. But I couldn’t find any alteration. Finally I found that these two proteins, spastizin and spatacsin, interacted with phosphatidylinositol 4-kinase B, which is a very critical component for ALR.

Tell us more about where the research has gone since, and where you think it will take you?

Lee: I have now worked as a postdoctoral fellow here for four years. My current studies continue to be on the HSP proteins related to endosomal trafficking. The paper here is the first finding with HSP caused by this primary lysosomal defect. Many other neurodegenerative disease proteins are also implicated in this endo/lysosomal pathway, such as Parkinson’s disease or Charcot-Marie-Tooth neuropathy. For those diseases, the study of lysosomal defects has been done intensely, but for HSP, this pathway is not well established. My current projects will allow us to elucidate more common pathways underlying HSP’s relationship to endo/lysosomal trafficking.

Chang: The success of this study led me to consider the next step. Scientifically, my interest is moving to autophagy, which has been related to HSP in this study. Neurons might be particularly vulnerable to autophagic defects. Many neurological disorders have been shown to be caused by impaired autophagy. For now, I have very few preliminary results, but I’m trying to draw a very big picture about the links between neurological diseases and autophagy.

It also may be worth pursuing additional mechanistic details regarding the relationship between spastizin and spatacsin with ALR. Although our JCI paper identifies a very detailed mechanism, there are many other components reported that are not easily connected, so I think that is very big challenge.

What is it like to work together as a husband and wife?

Chang: We try to be coworkers in the lab and to be a husband and wife at home. Although sometimes we continue work discussions on the way to pick up our son, we become a family again after we see his face. This is important to us to maintain work-life balance and to avoid being overwhelmed by working together. These efforts allow us to be the best working partners. Since no one in the world could understand our situation more than we can, we do not hesitate to share ideas and be completely open with our opinions. Open collaboration is always the number one priority to us. It’s not always an easy task, but this openness allows us to quickly examine new ideas.

Do you have any advice for trainees who also husband/wife or partners in terms of navigating your career choices?

Lee: Nothing special, but I would give a few pieces of advice. First, always try to keep your family as your first priority. Second, try to motivate and respect each other at the same time. Third, keep in mind that he/she is not only your partner but also an independent researcher like you.

About the first authors

Jaerak Chang and Seongju Lee each received a Ph.D. in biological sciences from Seoul National University in Seoul, Korea, where they were both postdoctoral fellows. Dr. Chang and Dr. Lee are currently postdoctoral fellows in the laboratory of Dr. Craig Blackstone at the National Institute of Neurological Disorders and Stroke at the National Institutes of Health.

Autophagy allows cells to adapt to changes in their environment by coordinating the degradation and recycling of cellular components and organelles to maintain homeostasis. Lysosomes are organelles critical for terminating autophagy via their fusion with mature autophagosomes to generate autolysosomes that degrade autophagic materials; therefore, maintenance of the lysosomal population is essential for autophagy-dependent cellular clearance. Here, we have demonstrated that the two most common autosomal recessive hereditary spastic paraplegia gene products, the SPG15 protein spastizin and the SPG11 protein spatacsin, are pivotal for autophagic lysosome reformation (ALR), a pathway that generates new lysosomes. Lysosomal targeting of spastizin required an intact FYVE domain, which binds phosphatidylinositol 3-phosphate. Loss of spastizin or spatacsin resulted in depletion of free lysosomes, which are competent to fuse with autophagosomes, and an accumulation of autolysosomes, reflecting a failure in ALR. Moreover, spastizin and spatacsin were essential components for the initiation of lysosomal tubulation. Together, these results link dysfunction of the autophagy/lysosomal biogenesis machinery to neurodegeneration.