An interview with Barbara Wegiel 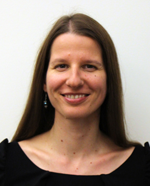 In the November issue of the JCI, Wegiel et al. describe a unique mechanism whereby carbon monoxide (CO) produced by heme oxygenase 1 (HO-1) in macrophages results in ATP production by several bacteria. The ATP in turn activates the NALP3/IL-1β inflammasome and intensifies bacterial killing through the purinergic P2X7 receptor. In this work, they demonstrate that ATP can function as a pathogen-associated molecular pattern (PAMP) in host-microbe interaction. This month we talked with Barbara Wegiel about her role in the project, her personal reflections on research here and abroad, and her advice for succeeding in the world of medical research.

Tell us more about the research you recently published in the JCI and your role in the project.

It started with basic questions on the role of carbon monoxide in the innate immune response of macrophages to bacteria — whether CO modulates IL-1β expression. We knew that CO was antiinflammatory when administered prior to endotoxin, but asked the question whether a similar response would occur in the presence of live bacteria, especially when CO would be administered after bacteria. This was interesting because carbon monoxide is now being tested in multiple human clinical trials. We were trying to dissect and understand the mechanisms behind the very strong antiinflammatory and cytoprotective effects of carbon monoxide in response to bacterial infection. In the model that we developed with live bacteria, CO was given after the inoculation, and to our surprise it turned out to actually induce IL-1β production. The greater the activation state of the macrophages and the immune response, the faster the pathogen is cleared and the inflammation is resolved.

Through a lot of different approaches and experiments, we found that CO was not directly acting on macrophages; rather, CO had a direct effect on bacteria, which was the very novel and intriguing part. What was even more surprising was that CO compelled the bacteria to generate and release the ATP (Figure 1). This was an active release of ATP from the bacteria, and this ATP was then able to act on the macrophages through the P2X7 receptor. I think the most interesting part of the research turned out to be that we were able to identify ATP, in this case, as a pathogen-associated molecular pattern (PAMP), rather than a damage-associated molecular pattern, as it has been considered up to now. 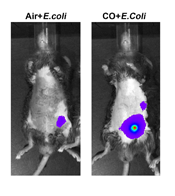 What were some of the challenges that you encountered during this research?

One of the most difficult questions was raised by one of the reviewers about whether ATP from bacteria can actually bind to the P2X7 receptor on mammalian cells. Through a collaboration with Dr. Brian Zuckerbraun at the University of Pittsburgh, we developed an assay to show that ATP, which was radiolabeled and endogenously produced by the bacteria, was released extracellularly in response to CO and bound to the P2X7 receptor on macrophages. Using this assay, Dr. Zuckerbraun was able to pull down the P2X7 receptor containing the radiolabeled ATP from the macrophage and demonstrate that the binding was actually occurring.

How do you see this work being applied therapeutically in human medicine?

I think any time you talk about inflammation, any kind of disease that is associated with inflammation or bacteria, you could potentially apply these findings. I am continuing this work in tumor models. The focus of my current research is on tumor biology and inflammation, looking at the tumor microenvironment, and plasticity of the immune cells in response to chemotherapy and radiation. Many cancers are associated with chronic or acute inflammation induced by pathogens, like in gastric cancer. Another example is prostate cancer and prostatitis, where the inflammatory process is associated with the risk for developing cancer. Modulating the inflammation process early on by carbon monoxide would be a potentially very important therapeutic strategy for multiple diseases.

What motivated you to start to pursue a research career?

I was very much interested in biology since high school and even primary school. When I studied in Poland, we had to choose our subject of interest by the middle of high school, so I chose biology and chemistry as my main focus. Afterwards, I was confident that I would like to do science. I did not actually have anyone in the family who was interested in biology, surprisingly. The first research experience that I had was during my master’s thesis in Sweden, and this was really amazing. I met a lot of supportive and very encouraging supervisors and mentors that gave me a lot of freedom during my career. This is why I was very much encouraged and I wanted to follow up in science.

What were some of the advantages/disadvantages to being trained abroad and in the United States?

I come from Poland, originally, where I completed my master’s degree, but afterwards, I came to Boston as an exchange student for my Ph.D. in biochemistry with Dr. Fritz Bach at the Beth Israel Deaconess Medical Center. I completed a second Ph.D. in clinical sciences in Sweden at Lund University. Afterwards, I began my postdoc in Dr. Leo Otterbein's laboratory, who was my mentor when I started my first junior faculty appointment at BIDMC. Leo has been an outstanding mentor and supporter through all my time at BIDMC.

Now, I have established my own lab as an assistant professor here at Harvard. I am now training students from both Europe and the U.S. In general, the task of training is different, because you decide much earlier what you want to do in Europe, and in the United States you can actually wait and decide later. You also have differences in how the lab works in Europe versus here. It is much easier to obtain reagents in the U.S., especially here in Boston, where you can find any reagent or knockout or transgenic mouse in neighboring laboratories. You don't appreciate it until you go outside of the Longwood Medical Area. Here, you have every state-of-the-art resource you need for your work somewhere just around the corner; you just have to reach out for it. It is more difficult in Europe, but I think there is still a lot of great science going on everywhere. One of the benefits of being in Europe is a strong focus on tissue and sample biobanks, with follow up on patients for 20–30 years. This brings a lot of important data for translational research.

What advice do you have for trainees that are early in their research training or about to transition into a junior-faculty position?

I think the most important thing is to choose very wisely who is your mentor. You have to choose a very supportive mentor at the beginning. I always had extremely supportive mentors who were not only giving me projects to do, but actually gave me freedom to do my own work, too. Equally important, I think, is to be enthusiastic about what you're doing. If you don't like what you're doing then you will never succeed. You have to really like coming to the lab every day, and if you work hard, everything will work out eventually. I was lucky to have great mentors during my Ph.D. and postdoctoral training, and I have a very supportive Chairman in the Department of Surgery at BIDMC, Dr. Elliot Chaikof. I was also lucky to get a start-up package from the department, obtaining an American Heart Association Scientist Development Grant, and help through the grant writing process for my first NIH grant. I think all of these factors are very important, and they all need to come together; otherwise, it’s very challenging.

About the first author

Barbara Wegiel, Ph.D., is currently an assistant professor at Harvard Medical School and the Department of Surgery at Beth Israel Deaconess Medical Center in Boston. She received her Ph.D. in Biochemistry at Jagiellonian University in Kracow, Poland, and Ph.D. in clinical sciences at Lund University in Sweden. She completed her postdoctoral training at Harvard Medical School in Dr. Leo Otterbein's laboratory. She is a recipient of a Scientist Development Grant from American Heart Association, as well as an Eleanor and Miles Shore HMS Fellowship. Dr. Wegiel’s research interests are focused on the molecular mechanisms of carcinogenesis. Her laboratory is interested in defining the role of heme degradation enzymes — heme oxygenase-1 and biliverdin reductase — and how they impact the tumor microenvironment.

Eric Schauberger, D.O., Ph.D., is a third-year pediatric resident at the Medical College of Wisconsin/Children’s Hospital of Wisconsin. He completed his medical and graduate school training at Michigan State University. He currently is applying to allergy/immunology fellowship programs and hopes to continue his research in asthma/allergy genetics and epigenetics. He received his B.S. in genetics from Iowa State University.

Microbial clearance by eukaryotes relies on complex and coordinated processes that remain poorly understood. The gasotransmitter carbon monoxide (CO) is generated by the stress-responsive enzyme heme oxygenase-1 (HO-1, encoded by ), which is highly induced in macrophages in response to bacterial infection. HO-1 deficiency results in inadequate pathogen clearance, exaggerated tissue damage, and increased mortality. Here, we determined that macrophage-generated CO promotes ATP production and release by bacteria, which then activates the Nacht, LRR, and PYD domains-containing protein 3 (NALP3) inflammasome, intensifying bacterial killing. Bacterial killing defects in HO-1–deficient murine macrophages were restored by administration of CO. Moreover, increased CO levels enhanced the bacterial clearance capacity of human macrophages and WT murine macrophages. CO-dependent bacterial clearance required the NALP3 inflammasome, as CO did not increase bacterial killing in macrophages isolated from NALP3-deficient or caspase-1–deficient mice. IL-1β cleavage and secretion were impaired in HO-1–deficient macrophages, and CO-dependent processing of IL-1β required the presence of bacteria-derived ATP. We found that bacteria remained viable to generate and release ATP in response to CO. The ATP then bound to macrophage nucleotide P2 receptors, resulting in activation of the NALP3/IL-1β inflammasome to amplify bacterial phagocytosis by macrophages. Taken together, our results indicate that macrophage-derived CO permits efficient and coordinated regulation of the host innate response to invading microbes.