An interview with Jamie Anastas 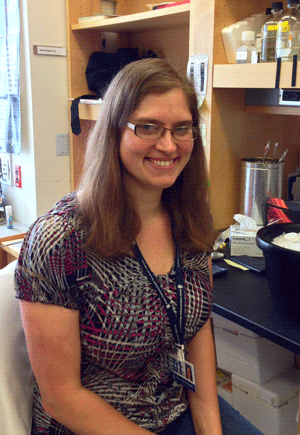 A research article in the July 2014 issue of JCI identifies resistance mechanisms of BRAF-mutant melanoma cells to targeted therapy among the WNT signaling pathways, specifically WNT5A. This research uncovers a means of acquired resistance to targeted therapies besides alterations in receptor tyrosine kinases and their associated downstream pathways (e.g., MEK). We asked the lead author, Jamie Anastas, about her work.

What first motivated you to pursue this research?

The main motivation was based on a piece of data that came from another publication looking at BRAF inhibitor–resistant melanoma cell lines, comparing those that responded well to BRAF inhibitors to those that responded poorly. In their Neoplasia paper, William Tap et al. found that high expression of WNT5A correlated with intrinsic resistance to the inhibitors (1). As a graduate student, I had been studying WNT5A and other molecules involved in β-catenin–independent WNT signaling for a number of years, so I thought it was a really interesting question to determine whether WNT5A signaling was functionally relevant to resistance. There was also work led by a former postdoc from Randall Moon’s lab looking at β-catenin–dependent WNT signaling and melanoma drug resistance, so I wondered whether these other pathways regulated by WNT5A that don’t regulate β-catenin might also play a role.

What were some of your initial expectations when you started the project?

I was expecting WNT5A to not do anything. Other systems where I had tried knocking down WNT5A (such as in breast cancer cells) or looking at melanoma metastasis (where it’s been best characterized as a metastasis-promoting factor) gave variable results that I wasn’t able to recapitulate in all cell lines. Seeing that WNT5A was also upregulated in response to BRAF inhibitors and that it seemed to enhance melanoma growth was quite surprising to me. Just because I had observed WNT5A doing something in one particular cellular context doesn’t necessarily mean that WNT5A will do the same thing in a different cell type or at a different developmental stage or in a different disease state. You just have to do the experiment and try to be rigorous about following up on whatever results you see.

What did you feel would be a successful outcome of this research and its impact in the field?

I would try to be a bit more open-minded about what constitutes success. I’m really just trying to do experiments where I get a clear response or a clear answer that’s repeatable and where I’ve got controls that work. That’s what you have to do as a scientist. It's nice when things are consistent, and it’s especially nice when you’re able to see something and then have other researchers see the same thing. Some of our findings have been confirmed in a paper from Ashani Weeraratna’s lab (2), which is very cool.

What do you see as one of the biggest challenges that you were able to overcome during this project?

I was fortunate while working on this paper to get help from one of the corresponding authors, Andy Chien, who helped set up a collaboration with a group of melanoma researchers in Australia to try and confirm some of our findings using melanoma patient samples, which I think is extremely important. That’s a continuing challenge, trying to have that open communication between basic researchers like me and people who actually deal with patients, especially since some of the results that people see in vitro, studying things like driver mutations, don’t seem to correlate with what’s going on in human cancer patients. Finding an avenue to connect with a group of clinicians who would let us analyze their RNA from patient tumors took some time but was immensely helpful, once we finally made that contact.

Where are you now in your research career, and how did this work impact that next step?

I’m doing a postdoc now in a somewhat different field. I’m still interested in cancer, but now I’m working on epigenetics in Dr. Yang Shi’s lab at Boston Children’s Hospital. I have a general interest in potential cross-talk between different signaling inputs and trying to understand how those signals might be integrated at the level of chromatin. I decided to join a lab researching chromatin in epigenetics to get that background and hopefully combine the two worlds together to look at signaling to chromatin, which is one big complicated mess, I suppose — but I like complicated messes.

Where do you see this work in the larger context of advancing the treatment of melanoma?

There are a number of different studies looking at BRAF inhibitor resistance in melanoma and different mechanisms, such as whether it involves the phenotypes switching between different WNT signaling pathways, misregulation of apoptotic proteins, altered activity of receptor tyrosine kinases, etc. I think the thing to do is to start looking at what’s happening in the patients. I know, from what I’ve read, that some of the immune-based therapies have generated some really promising results. The possibility exists to combine BRAF or MEK kinase inhibitors with immune-based therapy, PI3 kinase inhibitors, RTK inhibitors, and so on. One next step would be to look at samples from patients treated with different combinations of therapeutics and start evaluating a larger list of potential biomarkers to try and figure out what’s actually predictive. I think this should be a pretty broad list, because it’s really not clear why some patients respond and some don’t. Maybe the initial tumors are quite different from one another, and we just have to figure out some complicated combination of factors to determine whether a patient should be given, say, immunotherapy or a BRAF inhibitor or, most likely, some combination of different things. You can get kind of lost just using cultured cells and can come to a lot of false conclusions. If you can start looking at some correlations in patients, that’s a good way to develop hypotheses to try and confirm using the various melanoma models back in the lab.

Can you speak to the qualities of your laboratory experience that went into making this project a success?

Having lots of friends that help you do experiments, not trying to go at it alone, was very nice. I’ve been fortunate to work with many other people in the lab who are also excited about melanoma and WNT. Another thing that I think was important was looking at more than one cell line. This gets back to the idea that melanomas are quite heterogeneous, because if I had simply tried to do the experiments in the wrong melanoma cell line, I might not have seen anything. But, of course, it’s more work. No graduate student wants to be told, “You should do this in 10 cell lines,” and I didn’t do that, but it became clear to me how important it was to try experiments in different contexts.

Randy Moon’s lab can be a unique environment where you’ve got a bunch of people working on very diverse things. There are people working on zebrafish regeneration, stem cells, melanoma, basic development, etc., and in that sort of environment, you’ve got people with very different backgrounds and expertise. It’s a good place to develop some unique ideas, and you can talk about crazy things and get a lot of feedback from a variety of sources. The lab is also very generously funded by the Howard Hughes Medical Institute. Having the freedom, space, and the resources to go and to try things out that I thought were really interesting was great. I also benefited from some encouragement from Randy when things weren’t going as well as I would have liked.

About half of all melanomas harbor a mutation that results in a constitutively active BRAF kinase mutant (BRAFV600E/K) that can be selectively inhibited by targeted BRAF inhibitors (BRAFis). While patients treated with BRAFis initially exhibit measurable clinical improvement, the majority of patients eventually develop drug resistance and relapse. Here, we observed marked elevation of in a subset of tumors from patients exhibiting disease progression on BRAFi therapy. transcript and protein were also elevated in BRAFi-resistant melanoma cell lines generated by long-term in vitro treatment with BRAFi. RNAi-mediated reduction of endogenous WNT5A in melanoma decreased cell growth, increased apoptosis in response to BRAFi challenge, and decreased the activity of prosurvival AKT signaling. Conversely, overexpression of WNT5A promoted melanoma growth, tumorigenesis, and activation of AKT signaling. Similarly to WNT5A knockdown, knockdown of the WNT receptors FZD7 and RYK inhibited growth, sensitized melanoma cells to BRAFi, and reduced AKT activation. Together, these findings suggest that chronic BRAF inhibition elevates WNT5A expression, which promotes AKT signaling through FZD7 and RYK, leading to increased growth and therapeutic resistance. Furthermore, increased expression in BRAFi-resistant melanomas correlates with a specific transcriptional signature, which identifies potential therapeutic targets to reduce clinical BRAFi resistance.