Role of sphingolipids in senescence: implication in aging and age-related diseases

Role of sphingolipids in senescence: implication in aging and age-related diseases

Aging is defined as the progressive deterioration of physiological function with age. Incidence of many pathologies increases with age, including neurological and cardiovascular diseases and cancer. Aging tissues become less adaptable and renewable, and cells undergo senescence, a process by which they “irreversibly” stop dividing. Senescence has been shown to serve as a tumor suppression mechanism with clear desirable effects. However, senescence also has deleterious consequences, especially for cardiovascular, metabolic, and immune systems. Sphingolipids are a major class of lipids that regulate cell biology, owing to their structural and bioactive properties and diversity. Their involvement in the regulation of aging and senescence has been demonstrated and studied in multiple organisms and cell types, especially that of ceramide and sphingosine-1-phosphate; ceramide induces cellular senescence and sphingosine-1–phosphate delays it. These discoveries could be very useful in the future to understand aging mechanisms and improve therapeutic interventions. 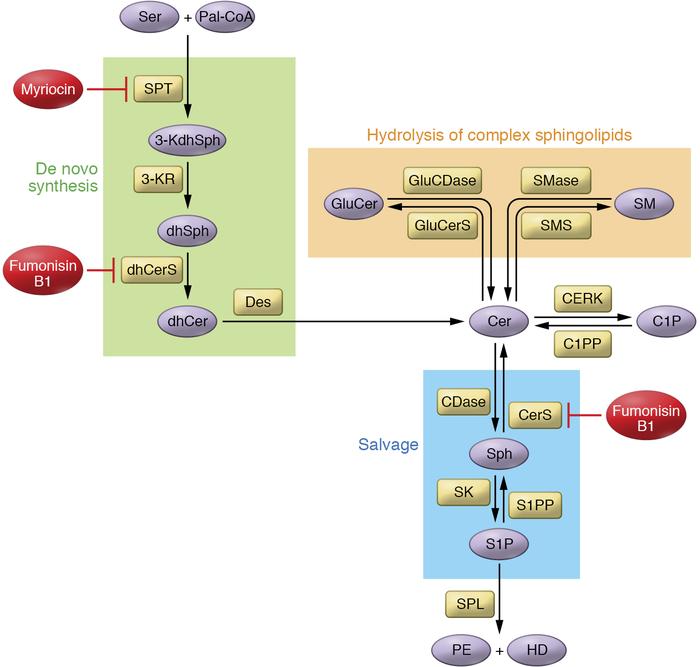 Cer plays a central role in the complex network of sphingolipid metabolism and can be synthesized by many different enzymes belonging to different pathways. Cer is also one of the most potent bioactive sphingolipids. It can regulate cell biology by inducing cell cycle arrest and senescence. Its role in cell death has been extensively investigated. The few direct targets of Cer that have been discovered are mostly protein phosphatases. By activating them, Cer can modulate signaling pathways. Another very well-studied sphingolipid is S1P, which has been shown to induce cell proliferation and migration among other functions. Its actions are mostly known through its ability to activate GPCRs, leading to modifications of cell biology. Two pharmacological inhibitors have been extensively used to study sphingolipid metabolism: myriocin inhibits sphingolipid synthesis through the inhibition of SPT, and fumonisin B1 is a CerS inhibitor, inhibiting de novo and salvage pathways. Des, dihydroceramide desaturase; dhCerS, dihydroceramide synthase; GluCDase, glucosylceramidase; GluCerS, glucosylceramide synthase; HD, hexadecenal; 3-KdhSph, 3-ketosphingosine; 3-KR, 3-ketoreductase; Pal-CoA, palmitoyl-CoA; PE, phosphoethanolamine; S1PP, S1P phosphatase.