The nuclear oxysterol-receptor paralogues LXRα and LXRβ share a high degree of amino acid identity and bind endogenous oxysterol ligands with similar affinities. While LXRα has been established as an important regulator of cholesterol catabolism in cholesterol-fed mice, little is known about the function of LXRβ in vivo. We have generated mouse lines with targeted disruptions of each of these LXR receptors and have compared their responses to dietary cholesterol. Serum and hepatic cholesterol levels and lipoprotein profiles of cholesterol-fed animals revealed no significant differences between LXRβ–/– and wild-type mice. Steady-state mRNA levels of 3-hydroxy-3-methylglutaryl coenzyme A reductase, farnesyl diphosphate synthase, and squalene synthase were increased in LXRβ–/– mice compared with LXRβ+/+ mice, when fed standard chow. The mRNA levels for cholesterol 7α-hydroxylase, oxysterol 7α-hydroxylase, sterol 12α-hydroxylase, and sterol 27-hydroxylase, respectively, were comparable in these strains, both on standard and 2% cholesterol chow. Our results indicate that LXRβ–/– mice — in contrast to LXRα–/– mice — maintain their resistance to dietary cholesterol, despite subtle effects on the expression of genes coding for enzymes involved in lipid metabolism. Thus, our data indicate that LXRβ has no complete overlapping function compared with LXRα in the liver. 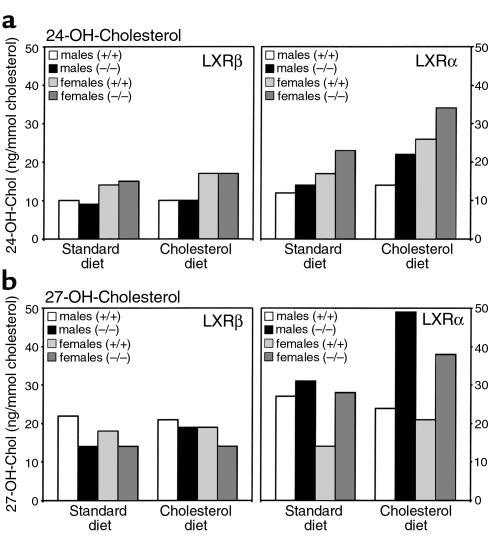