It is critical for survival to assign positive or negative valence to salient stimuli in a correct manner. Accordingly, harmful stimuli and internal states characterized by perturbed homeostasis are accompanied by discomfort, unease, and aversion. Aversive signaling causes extensive suffering during chronic diseases, including inflammatory conditions, cancer, and depression. Here, we investigated the role of melanocortin 4 receptors (MC4Rs) in aversive processing using genetically modified mice and a behavioral test in which mice avoid an environment that they have learned to associate with aversive stimuli. In normal mice, robust aversions were induced by systemic inflammation, nausea, pain, and κ opioid receptor–induced dysphoria. In sharp contrast, mice lacking MC4Rs displayed preference or indifference toward the aversive stimuli. The unusual flip from aversion to reward in mice lacking MC4Rs was dopamine dependent and associated with a change from decreased to increased activity of the dopamine system. The responses to aversive stimuli were normalized when MC4Rs were reexpressed on dopamine D1 receptor–expressing cells or in the striatum of mice otherwise lacking MC4Rs. Furthermore, activation of arcuate nucleus proopiomelanocortin neurons projecting to the ventral striatum increased the activity of striatal neurons in an MC4R-dependent manner and elicited aversion. Our findings demonstrate that melanocortin signaling through striatal MC4Rs is critical for assigning negative motivational valence to harmful stimuli.

The preference for aversive stimuli in -KO mice is mediated by dopamine. 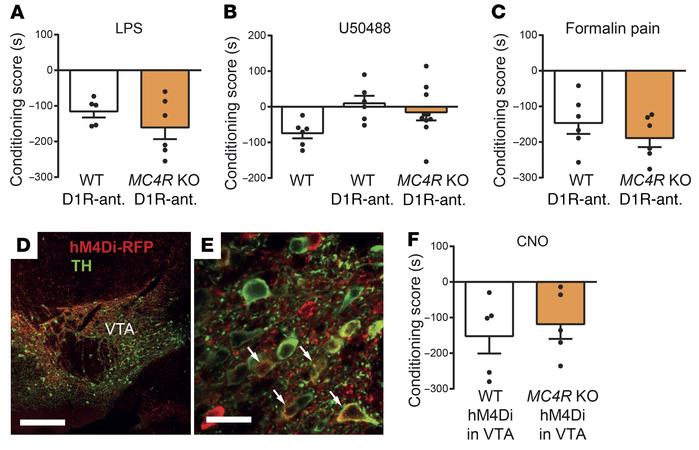