The tumor-suppressive role of trefoil factor family (TFF) members in gastric carcinogenesis has been suggested, but their significance and mechanisms in other digestive diseases remain elusive. To clarify the role of TFF1 in pancreatic carcinogenesis, we performed IHC on human samples, transfected siRNA against TFF1 into pancreatic cancer cell lines, and employed mouse models in which PanIN development and loss of TFF1 occur simultaneously. In human samples, the expression of TFF1 was specifically observed in pancreatic intraepithelial neoplasm (PanIN), but was frequently lost in the invasive component of pancreatic ductal adenocarcinoma (PDAC). When the expression of TFF1 was suppressed in vitro, pancreatic cancer cell lines showed enhanced invasive ability and features of epithelial-mesenchymal transition (EMT), including upregulated Snail expression. TFF1 expression was also observed in PanIN lesions of Pdx-1 Cre; LSL-KRASG12D (KC) mice, a model of pancreatic cancer, and loss of TFF1 in these mice resulted in the expansion of PanIN lesions, an EMT phenotype in PanIN cells, and an accumulation of cancer-associated fibroblasts (CAFs), eventually resulting in the development of invasive adenocarcinoma. This study indicates that the acquisition of TFF1 expression is an early event in pancreatic carcinogenesis and that TFF1 might act as a tumor suppressor to prevent EMT and the invasive transformation of PanIN.

TFF1 expression is lost in the invasive component of pancreatic adenocarcinoma. 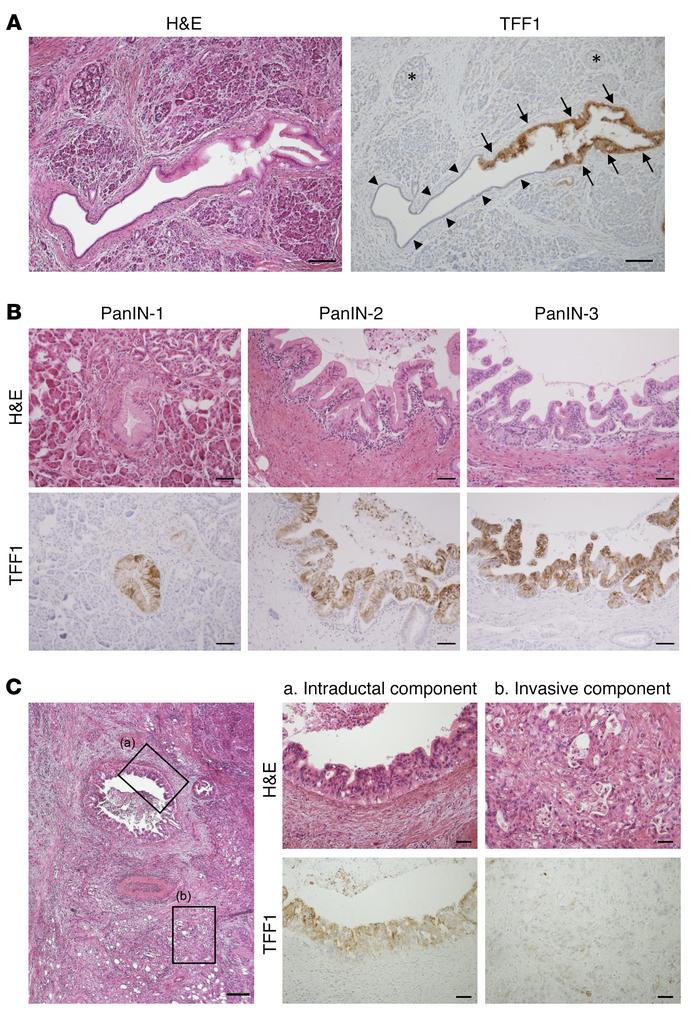