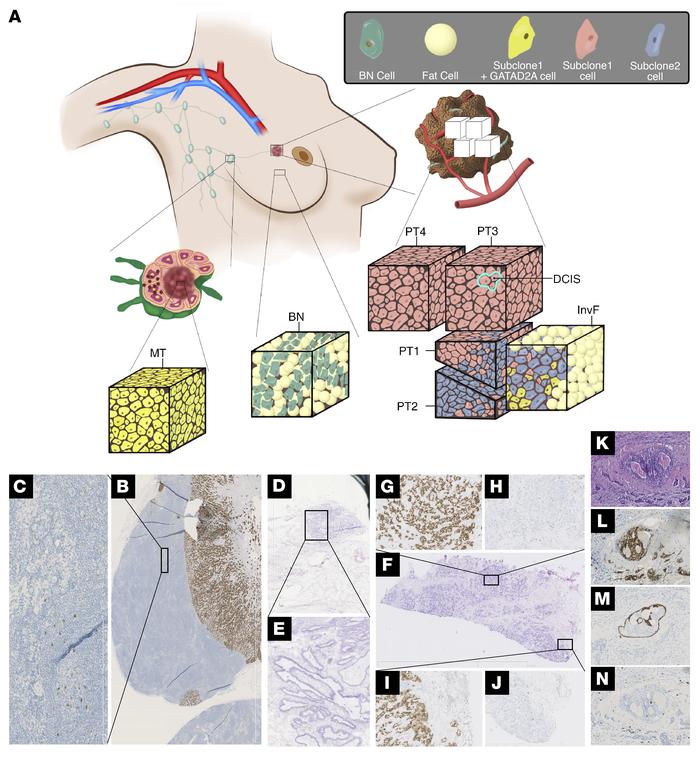 () Schematic representation of the tissues analyzed by WES of single cells and cell pools and the distribution of the different subclones within these areas. MT, metastasis. () Axillary lymph node containing large MT stained for estrogen receptor. () Magnification of an area of the lymph node exhibiting normal architecture and morphology, but also containing disseminated single cancer cells. () H&E-stained section of the BN-T including normal breast ducts. () Magnification of an area of showing normal breast epithelia. () H&E-stained section of the primary tumor biopsy provides a spatial overview of the 3 solid growth tumor areas selected for LCM in addition to the InvF. ( and ) Solid growth area 2 (PT2). ( and ) Border of solid growth area 1 (PT1) including the InvF. and are stained for Ki-67, while and are stained for ER. Original magnification: ×12.5 (, , ); ×100 (, , , , , ); ×50 (, , , ). Section containing area of DCIS stained with H&E (), and for ER (), CK14 (), and Ki-67 (). () The intact myoepithelial layer is visualized by staining for CK14.