Hypothalamic loss of Snord116 recapitulates the hyperphagia of Prader-Willi syndrome

Hypothalamic loss of Snord116 recapitulates the hyperphagia of Prader-Willi syndrome

Profound hyperphagia is a major disabling feature of Prader-Willi syndrome (PWS). Characterization of the mechanisms that underlie PWS-associated hyperphagia has been slowed by the paucity of animal models with increased food intake or obesity. Mice with a microdeletion encompassing the Snord116 cluster of noncoding RNAs encoded within the Prader-Willi minimal deletion critical region have previously been reported to show growth retardation and hyperphagia. Here, consistent with previous reports, we observed growth retardation in Snord116+/–P mice with a congenital paternal Snord116 deletion. However, these mice neither displayed increased food intake nor had reduced hypothalamic expression of the proprotein convertase 1 gene PCSK1 or its upstream regulator NHLH2, which have recently been suggested to be key mediators of PWS pathogenesis. Specifically, we disrupted Snord116 expression in the mediobasal hypothalamus in Snord116fl mice via bilateral stereotaxic injections of a Cre-expressing adeno-associated virus (AAV). While the Cre-injected mice had no change in measured energy expenditure, they became hyperphagic between 9 and 10 weeks after injection, with a subset of animals developing marked obesity. In conclusion, we show that selective disruption of Snord116 expression in the mediobasal hypothalamus models the hyperphagia of PWS.

Congenital deletion mice display a growth phenotype, but do not transition to obesity or hyperphagia. 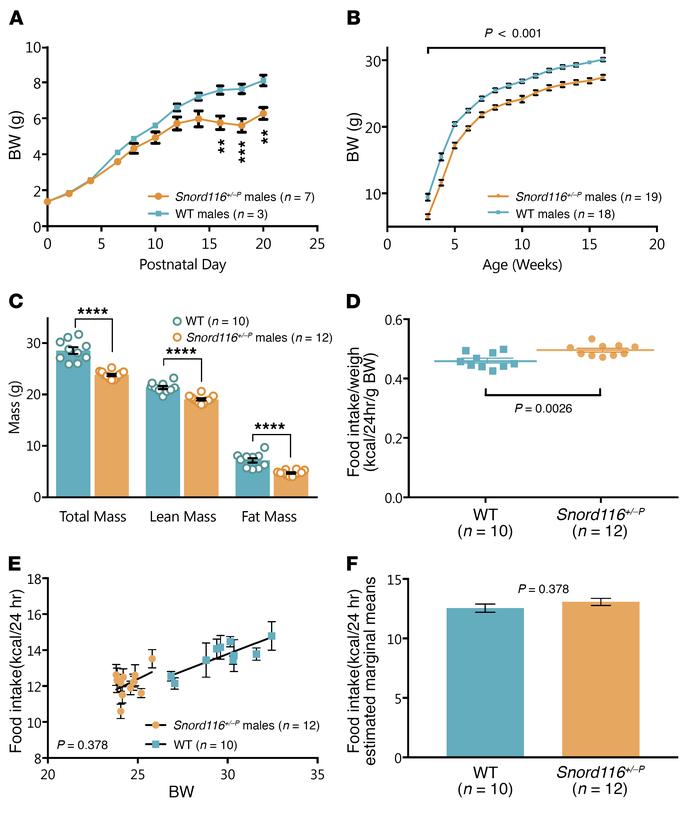