Despite the success of immune checkpoint blockade against melanoma, many “cold” tumors like prostate cancer remain unresponsive. We found that hypoxic zones were prevalent across preclinical prostate cancer and resisted T cell infiltration even in the context of CTLA-4 and PD-1 blockade. We demonstrated that the hypoxia-activated prodrug TH-302 reduces or eliminates hypoxia in these tumors. Combination therapy with this hypoxia-prodrug and checkpoint blockade cooperated to cure more than 80% of tumors in the transgenic adenocarcinoma of the mouse prostate–derived (TRAMP-derived) TRAMP-C2 model. Immunofluorescence imaging showed that TH-302 drives an influx of T cells into hypoxic zones, which were expanded by checkpoint blockade. Further, combination therapy reduced myeloid-derived suppressor cell density by more than 50%, and durably reduced the capacity of the tumor to replenish the granulocytic subset. Spontaneous prostate tumors in TRAMP transgenic mice, which completely resist checkpoint blockade, showed minimal adenocarcinoma tumor burden at 36 weeks of age and no evidence of neuroendocrine tumors with combination therapy. Survival of Pb-Cre4, Ptenpc–/–Smad4pc–/– mice with aggressive prostate adenocarcinoma was also significantly extended by this combination of hypoxia-prodrug and checkpoint blockade. Hypoxia disruption and T cell checkpoint blockade may sensitize some of the most therapeutically resistant cancers to immunotherapy. 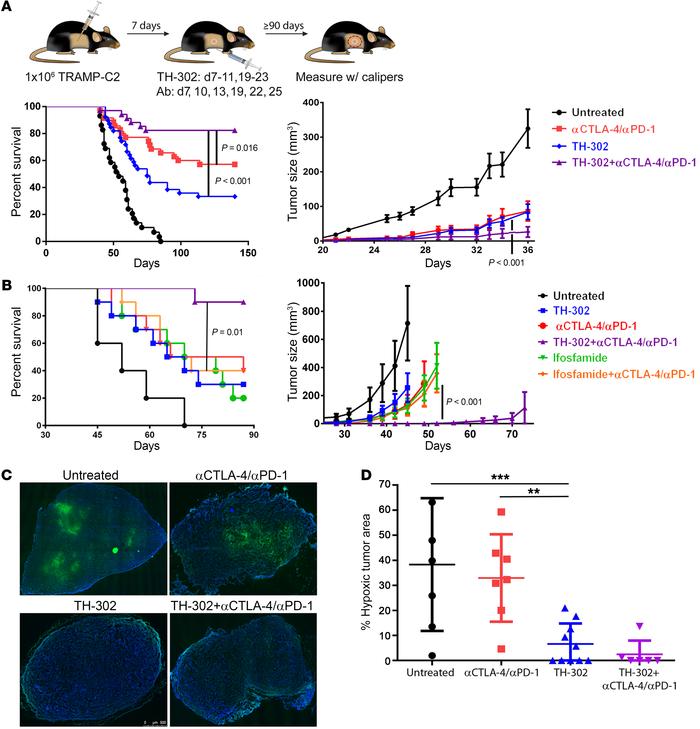 () Mice bearing TRAMP-C2 tumors preimplanted 7 days earlier were treated with 2 cycles of TH-302 and/or αCTLA-4/αPD-1 antibody and monitored for survival and tumor growth for 140 days (5–10 mice per group, = 5). Statistical significance for survival was calculated using the log-rank (Mantel-Cox) test, and for tumor growth a linear mixed model was used to analyze the longitudinal tumor size data with consideration of within-mouse correlations. () Mice bearing TRAMP-C2 tumors preimplanted 7 days earlier were treated as in except that groups receiving ifosfamide (50 mg/kg) with or without antibody were included (10 mice per group [5 untreated mice], = 1). () TRAMP-C2 tumor–bearing mice were treated with a single cycle of therapy, and 2 days later their tumors were stained for hypoxia following pimonidazole injection (Hypoxyprobe) and imaged at low magnification (×10). Representative images are shown for each group. () Hypoxic area from 4 full tumor slices for each group was quantified using ImageJ and the statistical significance between groups determined by ANOVA. ** < 0.01, *** < 0.001.