Metastatic breast cancers are still incurable. Characterizing the evolutionary landscape of these cancers, including the role of metastatic axillary lymph nodes (ALNs) in seeding distant organ metastasis, can provide a rational basis for effective treatments. Here, we have described the genomic analyses of the primary tumors and metastatic lesions from 99 samples obtained from 20 patients with breast cancer. Our evolutionary analyses revealed diverse spreading and seeding patterns that govern tumor progression. Although linear evolution to successive metastatic sites was common, parallel evolution from the primary tumor to multiple distant sites was also evident. Metastatic spreading was frequently coupled with polyclonal seeding, in which multiple metastatic subclones originated from the primary tumor and/or other distant metastases. Synchronous ALN metastasis, a well-established prognosticator of breast cancer, was not involved in seeding the distant metastasis, suggesting a hematogenous route for cancer dissemination. Clonal evolution coincided frequently with emerging driver alterations and evolving mutational processes, notably an increase in apolipoprotein B mRNA–editing enzyme, catalytic polypeptide-like–associated (APOBEC-associated) mutagenesis. Our data provide genomic evidence for a role of ALN metastasis in seeding distant organ metastasis and elucidate the evolving mutational landscape during cancer progression.

Activity of mutational processes is altered during breast cancer progression. 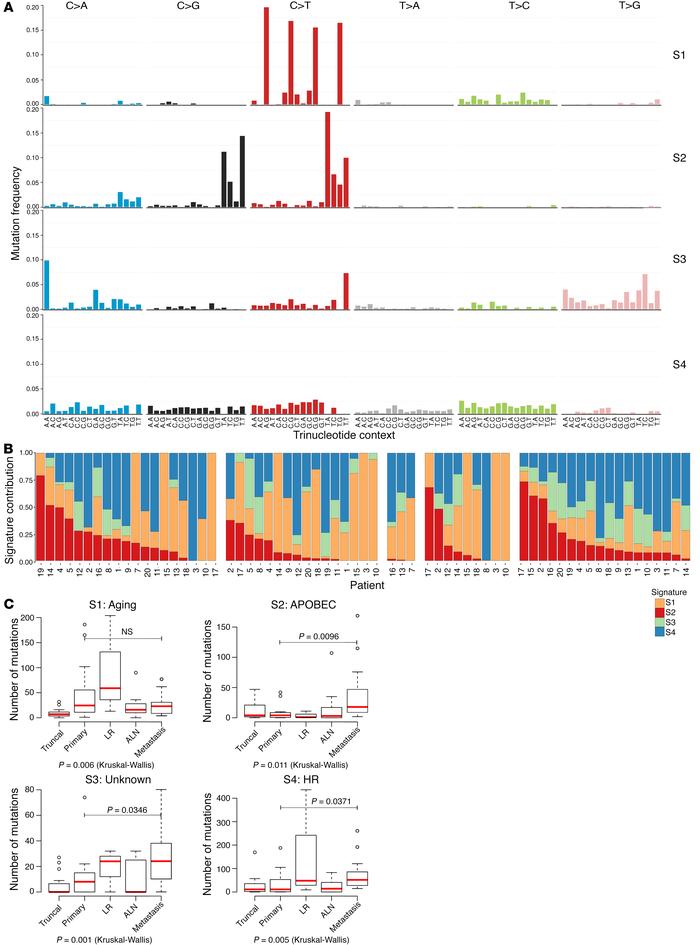 The 4 mutational signatures are labeled as S1, representing aging; S2, representing the APOBEC family of cytidine deaminases; S3, representing an unknown etiology; and S4, representing HR. In and , mutations are categorized into truncal, primary, LR, ALN, and metastasis, in which the truncal category contains the mutations present in all samples, while the other categories contain mutations present only in primary, LR, ALN, and metastatic samples, respectively. () Mutational signatures S1–S4. Each signature is represented by the mutation frequency ( axis) of 96 classes of mutations defined by the base substitution (color) and trinucleotide sequence context of the mutated base ( axis). () Stacked bar chart shows the relative contribution of each signature to each patient across the 5 different mutation categories. The 5 categories are shown in 5 panels, and the 4 signatures are depicted with 4 different colors. () Box plots (median and IQR) show the number of mutations attributed to each signature (S1–S4) in each mutation category. The values at the bottom of each panel were determined by Kruskal-Wallis test. The values within the panels were determined by post-hoc Mann-Whitney tests and adjusted for multiple hypothesis testing with the FDR method.