The essential role of hippocampal DGCs in the production of seizures during epilepsy. 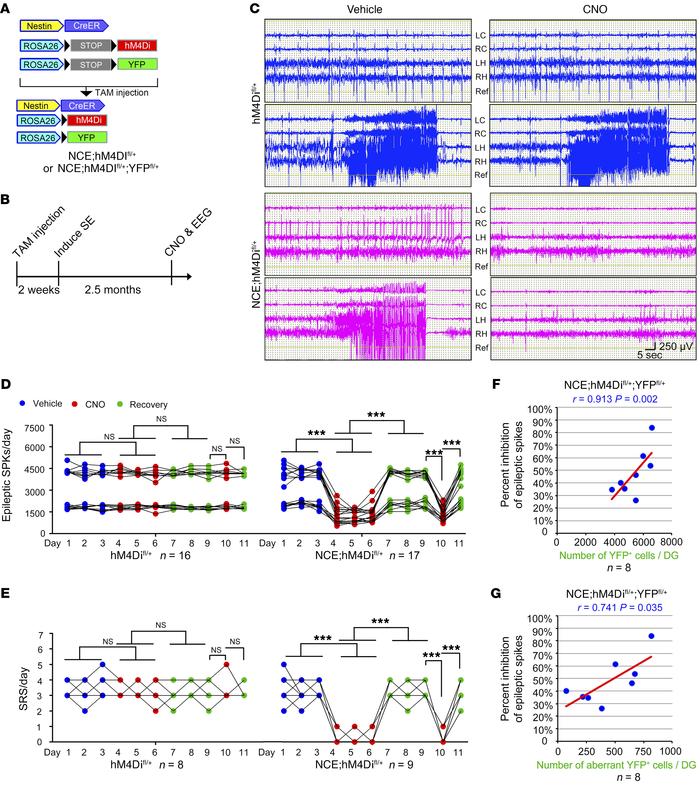 ( and ) Experimental schematics showing the strategy to selectively suppress the neuronal activity of hippocampal newborn DGCs in NCE;hM4Difl/+ or NCE;hM4Difl/+;YFPfl/+ mice. () Representative EEG recordings show that CNO treatment suppressed epileptic spikes as well as SRS in NCE;hM4Difl/+mice, but not in hM4Difl/+ control mice. ( and ) Epileptic spikes and SRS were quantified during 24 hours of vehicle (days 1–3, blue circles), CNO (days 4–6 and 10, red circles), and recovery without treatment (days 7–9 and 11, green circles). Quantitative results show that CNO treatment effectively reduced the frequency of epileptic spikes ( = 17) and SRS ( = 9) only in NCE;hM4Difl/+ mice during epilepsy. *** < 0.001. ( and ) Percentage of inhibition of epileptic spikes was proportional to the total number of hM4Di-expressing YFP-positive cells, as well as aberrant hM4Di-expressing YFP-positive cells, in the dentate gyrus. Asterisks in and indicate that CNO treatment resulted in a significant reduction in epileptic spikes and SRS compared with vehicle treatment, which returned to basal levels during each recovery period. Two-way RM ANOVA with Bonferroni’s multiple comparison tests (, ) or Pearson’s correlation (, ) were used.