Postictal bradycardia is due to apnea, not increased parasympathetic drive. 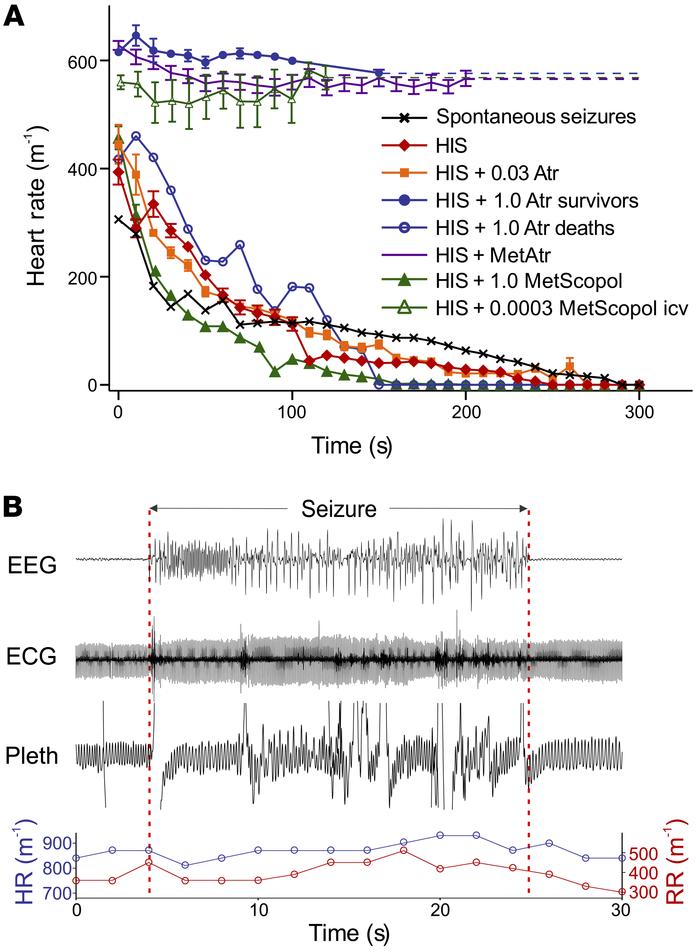 () Effect of muscarinic antagonists on postictal heart rate after heat-induced seizures (HISs). Untreated mice all died in response to HIS ( = 6). Atropine prevented bradycardia in 7 of 9 mice when given at a dose of 1 mg/kg (i.p.). Methylatropine (1 mg/kg, i.p.) also prevented bradycardia in 6 of 6 mice. Treatment with -methylscopolamine at very low dose (0.3 μg/kg, i.c.v.) prevented bradycardia in all mice ( = 5). In contrast, atropine (1 mg/kg, i.p.) did not prevent bradycardia or death in 2 of 9 mice, or when given at 0.03 mg/kg ( = 6 of 6; i.p.), a dose selective for blockade of peripheral muscarinic receptors. Bradycardia also occurred after spontaneous seizures ( = 2) and after pretreatment with -methylscopolamine (1 mg/kg, i.p.; = 6 of 6). All mice with postictal bradycardia also had apnea, whereas bradycardia did not occur in any mouse without apnea. T = 0 represents the time that apnea began (always during or at the end of seizures) or the end of seizures (if apnea did not occur). Error bars are not shown for the 2 groups with = 2. () Heat-induced seizure in an mouse, 30 minutes after pretreatment with atropine (1 mg/kg, i.p.). During this seizure, there was no apnea or bradycardia, and the mouse did not die.