Adaptation to respiration at birth depends upon the synthesis of pulmonary surfactant, a lipid-protein complex that reduces surface tension at the air-liquid interface in the alveoli and prevents lung collapse during the ventilatory cycle. Herein, we demonstrated that the gene encoding a subunit of the endoplasmic reticulum membrane complex, EMC3, also known as TMEM111 (Emc3/Tmem111), was required for murine pulmonary surfactant synthesis and lung function at birth. Conditional deletion of Emc3 in murine embryonic lung epithelial cells disrupted the synthesis and packaging of surfactant lipids and proteins, impaired the formation of lamellar bodies, and induced the unfolded protein response in alveolar type 2 (AT2) cells. EMC3 was essential for the processing and routing of surfactant proteins, SP-B and SP-C, and the biogenesis of the phospholipid transport protein ABCA3. Transcriptomic, lipidomic, and proteomic analyses demonstrated that EMC3 coordinates the assembly of lipids and proteins in AT2 cells that is necessary for surfactant synthesis and function at birth.

EMC3 is required for normal processing and trafficking of surfactant-associated proteins. 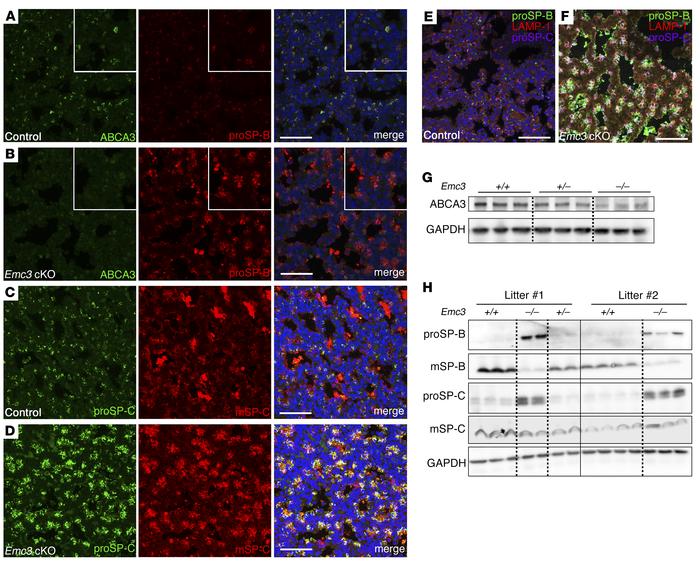