A critical event in the adaptation to extrauterine life is relaxation of the pulmonary vasculature at birth, allowing for a rapid increase in pulmonary blood flow that is essential for efficient gas exchange. Failure of this transition leads to pulmonary hypertension (PH), a major cause of newborn mortality associated with preterm birth, infection, hypoxia, and malformations including congenital diaphragmatic hernia (CDH). While individual vasoconstrictor and dilator genes have been identified, the coordination of their expression is not well understood. Here, we found that lung mesenchyme–specific deletion of CDH-implicated genes encoding pre–B cell leukemia transcription factors (Pbx) led to lethal PH in mice shortly after birth. Loss of Pbx genes resulted in the misexpression of both vasoconstrictors and vasodilators in multiple pathways that converge to increase phosphorylation of myosin in vascular smooth muscle (VSM) cells, causing persistent constriction. While targeting endothelin and angiotensin, which are upstream regulators that promote VSM contraction, was not effective, treatment with the Rho-kinase inhibitor Y-27632 reduced vessel constriction and PH in Pbx-mutant mice. These results demonstrate a lung-intrinsic, herniation-independent cause of PH in CDH. More broadly, our findings indicate that neonatal PH can result from perturbation of multiple pathways and suggest that targeting the downstream common effectors may be a more effective treatment for neonatal PH.

PH in -CKO mice is associated with failed VSM relaxation after birth. 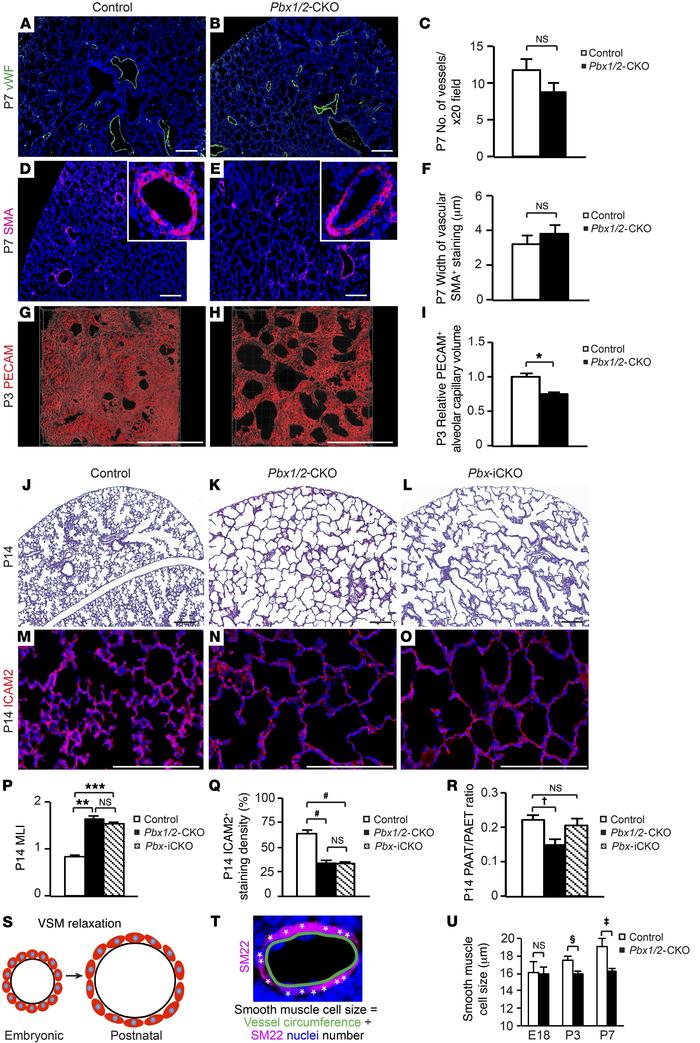 (–) At P7, when hypertension was apparent, vWF staining of proximal vascular endothelial cells showed no significant difference in vessel numbers ( = 0.19). (–) At P7, SMA staining revealed no change in pattern and no smooth muscle hypertrophy ( = 0.44). (–) At P3, 3D reconstruction and quantification of PECAM-positive alveolar capillaries showed reduced PECAM density and volume (* = 0.02). (–) At P14, H&E staining showed alveolar simplification in -CKO and iCKO mice relative to controls. and mice were normal in terms of morphology, physiology, and capillary quantification and were used as a combined control. () MLI analysis revealed significant alveolar simplification in -CKO (** < 0.0001) and -iCKO mice (*** = 0.0002) relative to controls ( = 3 in each group). -CKO and -iCKO mice had similar alveolar simplification ( = 0.26). (– and ) ICAM2 staining shows reduced capillary endothelial density in -CKO and -iCKO mice (# = 0.0007) relative to controls ( = 3 in each group). Capillary density was similar in -CKO and -iCKO mice ( > 0.99). () The PAAT/PAET ratio was reduced in -CKO mice († = 0.007) but not in iCKO mice ( = 0.82) compared with controls. () Illustration showing that VSM cells elongate after birth. () To estimate the average VSM cell size, the vessel perimeter was divided by the number of SM22-stained VSM cell nuclei. Asterisks indicate nuclei of SM22-positive cells. () -CKO VSM cells were similar in size to control VSM cells prior to birth (E18, = 0.92) but did not increase in size after birth compared with controls (P3, § = 0.02; P7, ‡ = 0.04). For all statistical analyses, except MLI and ICAM2 staining density, 4 samples were included from each group. Comparisons between 2 groups were made using a Student’s test or 1-way ANOVA for comparisons among 3 groups. Data represent the mean ± SEM. Scale bars: 200 μm. Original magnification, ×40 ( and , insets).