The expression of several drug-resistance genes, including MRP and p53, increases with advancing stage of human prostate cancer. Altered transcription could account for the genotypic alterations associated with prostate cancer progression, and it was recently reported that the promoter of MRP1 is activated in the presence of mutant p53. To determine whether there is a relationship between p53 status and the expression of MRP1, a human, temperature-sensitive p53 mutant (tsp Val138) was transfected into LNCaP human prostate cancer cells. In the transfected cell line (LVCaP), the wild-type p53 produced growth arrest at the G1/S interface of the cell cycle, inhibited colony formation, and induced p21waf1/cip1. Temperature shifting to 38°C (p53 mutant) produced a time-dependent increase in expression of MRP1. This change in MRP1 expression was also seen in isogenic cell lines in which p53 was inactivated by human papilloma virus (HPV)16E6 protein or by a dominant-negative mutant. Functional assays revealed a decrease in drug accumulation and drug sensitivity associated with mutant p53 and increased MRP1 expression. These results provide the first mechanistic link between expression of MRP1 and mutation of p53 in human prostate cancer and support recent clinical associations. Furthermore, these data suggest a mechanism tying accumulation of p53 mutations to the multidrug resistance phenotype seen in this disease. 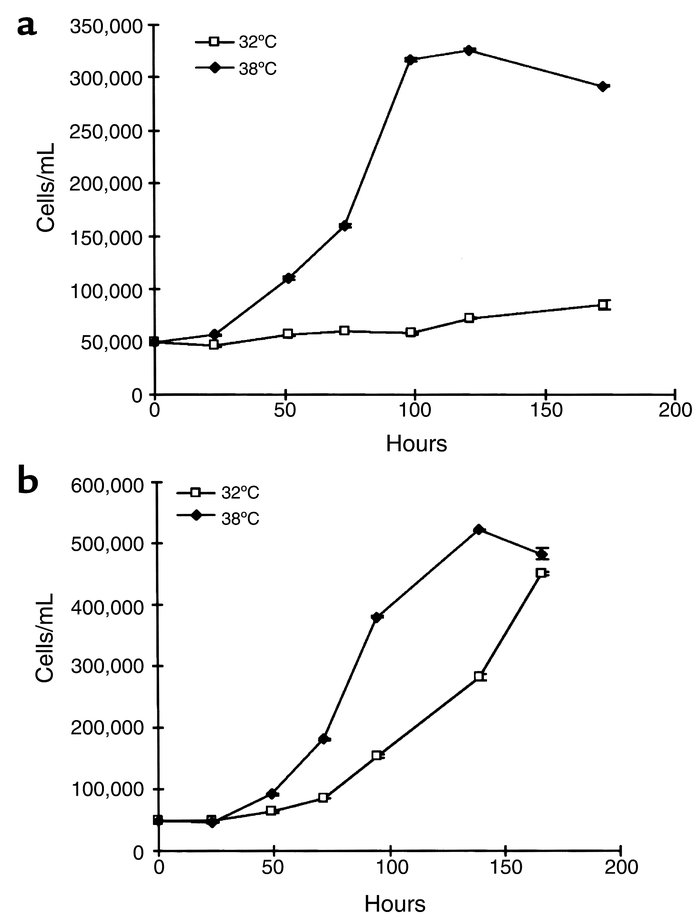 Effect of temperature on growth of LVCaP and LNCaP cells. Cells were plated at 3.5 × 104 cells/dish, allowed to grow for various periods, and then harvested and counted with an electronic counter. Each point represents the mean ± SD of triplicate cultures from a representative of three experiments. () LVCaP cells cultured at the permissive temperature (32°C; wild-type p53) and the restrictive temperature (38°C; mutant p53). () LNCaP cells cultured at 32°C and 38°C.