BACKGROUND. The histone deacetylase (HDAC) inhibitor vorinostat (VOR) can increase HIV RNA expression in vivo within resting CD4+ T cells of aviremic HIV+ individuals. However, while studies of VOR or other HDAC inhibitors have reported reversal of latency, none has demonstrated clearance of latent infection. We sought to identify the optimal dosing of VOR for effective serial reversal of HIV latency. METHODS. In a study of 16 HIV-infected, aviremic individuals, we measured resting CD4+ T cell–associated HIV RNA ex vivo and in vivo following a single exposure to VOR, and then in vivo after a pair of doses separated by 48 or 72 hours, and finally following a series of 10 doses given at 72-hour intervals. RESULTS. Serial VOR exposures separated by 72 hours most often resulted in an increase in cell-associated HIV RNA within circulating resting CD4+ T cells. VOR was well tolerated by all participants. However, despite serial reversal of latency over 1 month of VOR dosing, we did not observe a measurable decrease (>0.3 log10) in the frequency of latent infection within resting CD4+ T cells. CONCLUSIONS. These findings outline parameters for the experimental use of VOR to clear latent infection. Latency reversal can be achieved by VOR safely and repeatedly, but effective depletion of persistent HIV infection will require additional advances. In addition to improvements in latency reversal, these advances may include the sustained induction of potent antiviral immune responses capable of recognizing and clearing the rare cells in which HIV latency has been reversed. TRIAL REGISTRATION. Clinicaltrials.gov NCT01319383. FUNDING. NIH grants U01 AI095052, AI50410, and P30 CA016086 and National Center for Advancing Translational Sciences grant KL2 TR001109. 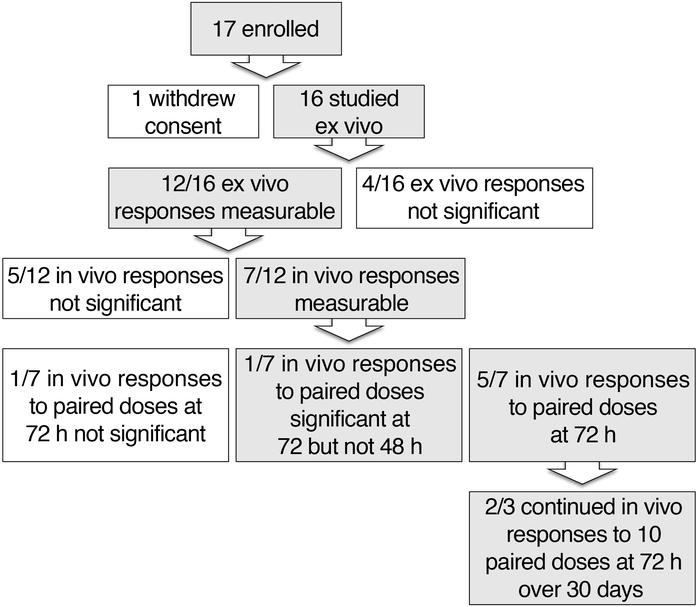